November 13th, 2013 - Independent game localization company Fruitbat Factory is happy to announce the puzzle RPG, 99 Spirits is now available on Steam. Released worldwide in May 2013, 99 Spirits is the English version of Tsukumogami (九十九神), originally developed by the Japanese indie game circle TORaIKI and released in Japan Fall 2012. 99 Spirits was the recipient of the December 2012 Indie Dev Grant, and raised 252% of target funds in a successful crowdfunding drive on IndieGoGo. Steam community votes Greenlit it on October 29th, 2013. 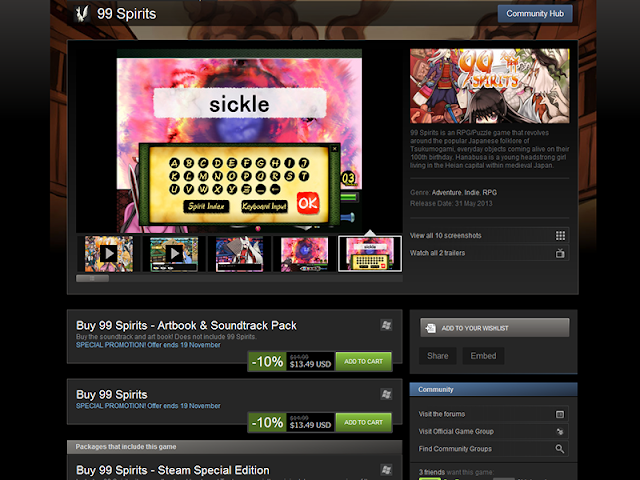 Game Features:
- Work out the true identity of your enemies in a unique battle system
- Capture enemies, master their skills for battle and use them to solve puzzles on the field
- Interact with over 40 unique characters and battle over 100 monsters
- Beautifully detailed art and an atmospheric original soundtrack bring feudal Japan alive
- Discover multiple unique endings that change based on the player’s actions
- Dual audio: Toggle between English and Japanese voice 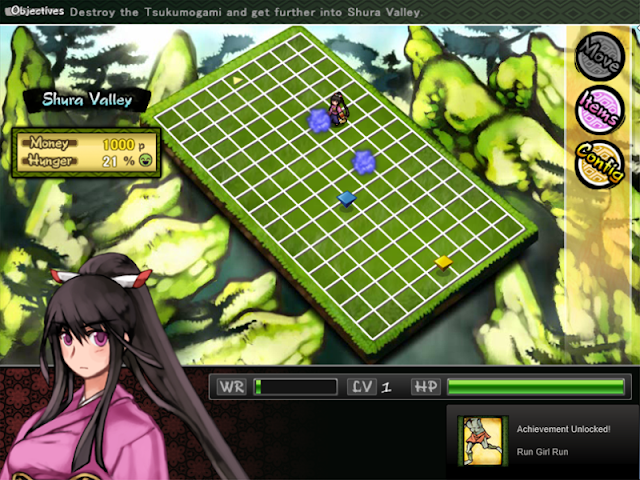 “We’ve spent most of the time after our Greenlight announcement working on the Steam achievements in particular. We have some big achievement enthusiasts among us. Since 99 Spirits is a complex game, it’s our hope the achievements will let people naturally discover new angles and enjoy all aspects of the game.” says Jakke Elonen, Project Lead.

99 Spirits is available for $14.99. In addition, a special “Artbook & Music Collection” bundle containing a 60-page digital Artbook with original commentary by the creator, and a 17-track Music Collection for the game, can be purchased for $14.99.

To commemorate the release, 99 Spirits is further made available in a Steam Special Edition that includes the game 99 Spirits, Artbook, Music Collection, plus the original Japanese version, Tsukumogami, priced at $24.99.

“After the IndieGoGo project in May we found ourselves with all these great materials we want to get into people’s hands. These new packages we’re offering provided a good way to do so.” comments Ozhan Sen, Fruitbat Factory’s Marketing Lead. 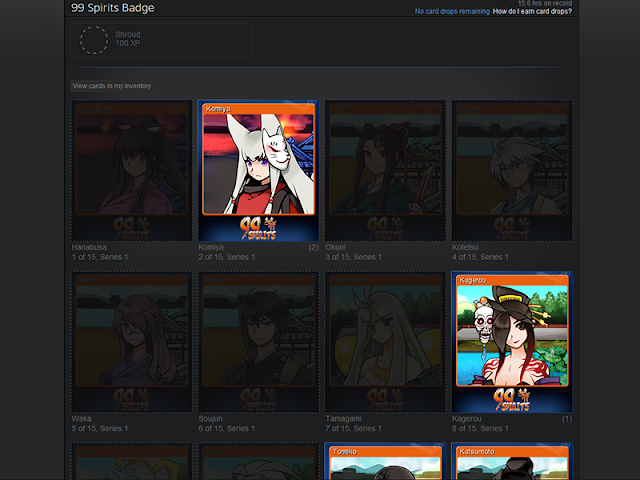 99 Spirits is available on Steam for PC (Windows).


Fruitbat Factory is an independent localization company focusing on bringing interesting Japanese indie games to English-speaking audiences. Their other releases are Yakiniku Banzai’s critically acclaimed strategy game War of the Human Tanks in Fall 2012, and Orange_Juice’s digital board game 100% Orange Juice in September 2013. For more information, visit the developers’ homepage at http://www.fruitbatfactory.com/

TORaIKI is an independent Japanese game circle that aims to produce Windows PC titles suitable for gamers of all ages. 99 Spirits is TORaIKI’s first release, published in Japan in August 2012. For more information, visit the developers’ homepage at http://www.toraiki.com/