Fight intense bite-sized turn-based battles on a hex-based grid
in the cutest alien invasion you've ever stopped!
2+1 Games llc is announcing today the launch of a Kickstarter campaign to fund the completion of P.A.W.S. (Prime Alien Watch Squad), a  free-to-play, casual~strategy battle game.

The game has already been in development for over twelve months, and the company has invested over $100,000 in the project to date. What we aim to fund: support for additional platforms, infrastructure, extra worlds, extra units and an asynchronous PvsP mode.

Storyline
Aliens have invaded the Earth's timestream. World monuments are disappearing mysteriously, in the wake of strange alien devices..
Thankfully, P.A.W.S is on it! The Primary Alien Watch Squad, is Earth's highly trained force, specialized to defend against alien invasions. 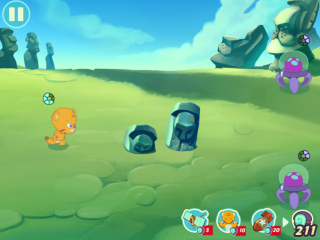 Features
Length of game play: 20” to 60” for each stage.
Replayability: each stage has more than 40.000 permutations.
Campaign mode with Special Missions and Boss Battles.
Special Abilities: Each of your unit is special in some way: Extra Strength unit / Healer unit / Long Range unit / Multiple Attack unit.
Special Weapons that can at any moment bring a change to the tides of battle. Bought using AstroCredits (the collectible in-game currency).