When I first heard about SBX: Invasion and its advertised blend of tower defence strategy and asteroids-like gameplay, I was excited! Two of my favourite genres mixed together had to be a good thing.

So let’s start from the top, my first impressions. These were a bit of a mixed bag if I’m honest, specifically to do with the graphics. There feels like there’s a disconnect between things like the titles and GUI when compared to the ship graphics and asteroids. Both styles were fine in their own right but when combined like this it felt like there wasn’t a clear art direction.

Some of the GUI elements were also of different styles and designs which was a little off putting, however everything was functional so no major complaints, however I did miss a redefine keys option. 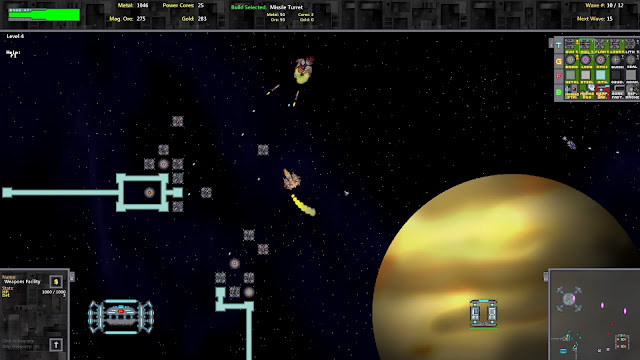 So, onto the game!


In each level you control a medium sized spaceship, using the W, A and D keys to move and space to fire its weapon. This ship also doubles as a construction platform and can place generators, towers and resource collection structures around the game area.

This is the general meat of the game and I have to say it was quite enjoyable. I really liked the idea of controlling the construction vehicle and it added a deeper sense of involvement. I think it would have been better if the construction range was limited (at least to start with, perhaps upgradable) however with my monitor resolution I was able to build pretty much anywhere in a game without having to move that much closer to it.

My biggest issue with the gameplay however was the S key. There were oh-so many times I wanted to retro-thrust my spaceship; however this is not possible and instead the S key is the hotkey to sell buildings. It brings up a dialog which pauses the action, and this in itself can get quite frustrating. For example, when you're in the midst of battle and you trying to manoeuvre around your defences to shoot the enemy, and you forget that S isn’t a ship control key! 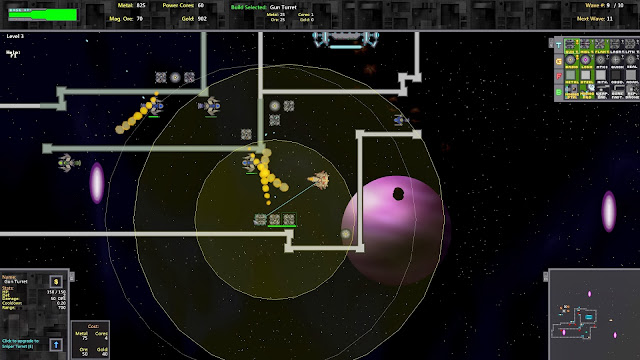 Placement of your structures is key, just as it should be in a tower defence game. Before turrets can be placed, a mobile generator to power them needs to be placed If that generator gets destroyed then the turrets are de-activated. Keeping your defences behind wall structures is necessary to prevent this from happening. The upgrades are very useful indeed and almost turbocharge any turret you can afford to improve.

The only upgrade I didn’t feel was much fun was for the structure that upgrades the weapons for your ship. Doubling or even tripling the amount of firepower it had still felt very underpowered compared to a turret.

After a short while enemies will appear from pre-placed portals and attack your station. A nice touch here were enemies (usually called assassins) that specifically target your resource gathering operations. It forces you to split your time between your primary base and mining structures adding that extra challenge to each level.

Enemies appear in waves - however while there’s a next-wave counter in the corner of the screen, there’s nothing that really shouts to you that a new wave is soon to be incoming, or that you have some small breathing space before the next wave starts. Currently I think this is a big issue here, especially when the action heats up a bit.

Every few levels you come across a Boss ship - and these are challenging to say the least! Again this is where a short gap between waves would have been useful so I could set up my final defences before this appears. You do get a warning but that’s it - once you’ve been warned it’s already upon you! They’re certainly satisfying to destroy though.

Some of the turrets are great fun, the laser and missile turrets especially are very watchable as they wear down the enemies. Missiles were my favourite type of turret for sure but it was definitely tactically sound to have a good mixture of turret types to counteract the different types of ships. Again another plus if you’re a fan of this genre.

Let’s talk about sound, as there’s an unfortunate lack of sound in SBX Invasion. Turrets do not make a sound when firing. When anything is destroyed it makes the same 8-bit “destroyed” sound. This destroyed sound is also used when a structure is upgraded. It feels a bit overused and at the very least it would have been nice to have some variation.

I can imagine that with every turret firing it might get a bit noisy but with how things are at the moment it just feels far too quiet and in desperate need of more variation.

The music wasn’t too bad, although it can get a bit repetitive after 12 waves and a boss. Again it would have been quite neat if there were gaps between waves and the music was incidental in line with this. 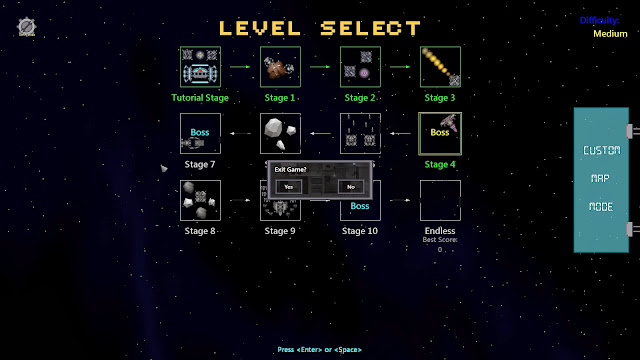 Despite a few issues, mostly with the aesthetics, SBX: Invasion provides a worthwhile and entertaining tower defence / asteroids experience. While it lacks a certain amount of polish, its low price point makes it an attractive game for any tower defence fan.

Review by Andy – one of the Bumpkin Brothers, creators of The Machine and Space Farmers.