Platform 2013 is promising its best ever line-up, with major international players descending on Hull city centre. 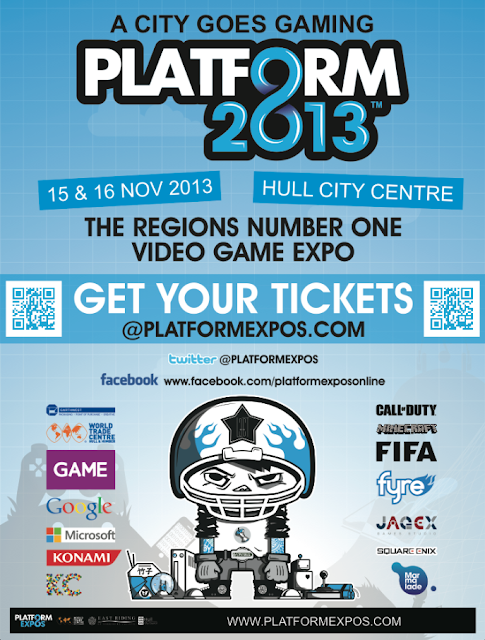 The gaming and content creation expo, now in its fourth year, takes place on November 15/16 and will feature Google, Sony Computer Entertainment and Microsoft as well as a host of games experts, games studios, tournaments, workshops and exhibitors. It takes place just days before the winner of UK City of Culture is announced, of which Hull is a finalist.

Lindsay West, organiser of the Platform Initiative and joint managing director of Hull-based Garthwest Ltd, said that the expo was putting Hull on the map nationally and internationally. “The aim of Platform is to encourage and help young people to forge careers and start businesses in gaming and content creation.

“We want to create a significant sector in the Humber and retain our talent. It is a massive and growing area of business that we can be part of if we put everything in place to take advantage of what it has to offer.”

Exhibitors include local indie games developers alongside some of the biggest names in gaming such as Marmalade Game Studio, which made Call of Duty Black Ops Zombies and Lara Croft and the Guardian of Light; Square Enix responsible for the Final Fantasy Series; and Konami, one of the world’s largest gaming companies responsible for many of the best known games including Castlevania, Contra and Gradius.

For Fifa, Minecraft, Gears of War and Call of Duty fans, there will competitive tournaments, which can be signed up for at the event.

FyreUK, one of the world’s leading experts in Minecraft will be showcasing its latest work to be viewed on the big screen.

Speakers over the two-day expo cover varied subjects such as how to run a film studio, voice production in video games and introduction to programming. Ade Oshineye from Google will talk about Google+ for games and apps, and his colleague Jake Archibald on making games for Google Chrome. Richard Adams from Microsoft will cover developing for the Xbox. Carla Prada, head of Microsoft’s Soho Studios will discuss the running of a successful gaming studio and Pete Smith of Sony Computer Entertainment’s XDev Studios will outline how to successfully take a product to market.

Workshops on Friday November 15 will be delivered by the University of Hull, Hull School of Art and Design, Hull College and Grimsby Institute, and include hardware interfacing with Raspberry Pi, introduction to gaming music and character drawing, and the use of Oculus Rift.

For retro gaming enthusiasts, Replay Events is hosting an '80s classroom at the Guildhall, which will be kitted out with BBC Micros, as well as a Retro Replay Lounge featuring retro consoles with knockout tournaments on classic titles.

Mr West added: “I would like to say a huge thank you to Hull City Council for helping to make sure the event happened this year and to our sponsors KC, World Trade Centre Hull & Humber and Garthwest.”

The event takes place at key venues in the city centre including Hull City Hall, Ferens Art Gallery, the Guildhall and Hull College. The event runs from 10am – 5pm each day.