I interviewed Christina-Antoinette Neofotistou, Lead Artist for P.A.W.S. (Prime Alien Watch Squad), a casual strategy game currently in development, about the game and trying to get it Kickstarted...


1/ How did "Prime Alien Watch Squad" come about?
Our game designer Andreas is a strategy games fanatic! He had an inspired design where your units have only one Stat, a number that is used for moving, attacking and defending. He initially designed PAWS as a board game, p2p, and soon found out it's lots of fun. Then he contacted me, Christina, on the basis that I'm one of the better illustrators in Greece. Funny anecdote, while he was pitching the game to me, he asked me if I can emulate the art style of Pandalife, an MMO for children. I happened to be lead artist on that project, so we had a good laugh! 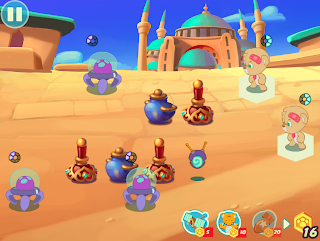 2/ But this game isn't purely for kids or casual gamers?
We want casual gamers to experience the fun we have with tactical games (we're both hardcore fans) but try to pitch Master of Orion to a casual gamer, like my dad. We want to appeal to gamers who are put off by guns and violence, we need kids (kids are actually a very demanding audience) and casual gamers, to introduce them to the genre. But on the other hand it's more strategic than you'd think, especially in later levels.


3/ Tell us a bit about the later levels of the game.
In order to finish some of the later levels in the game, you'll definitely need your wits about you. Of course, you can always take a shortcut and use special weapons to kill your opponents, but those cost astrocredits, the in-game currency. So in order to be able to afford special weapons, you need to go back to already explored stages that you barely scraped through and try to strategize so that you not only beat the stage, but also manage to collect the cash.

4/  What's been the best thing about making P.A.W.S. so far?
The people's response. We haven't had a public beta yet, but in our closed alpha sessions, people are loving the controls, the graphics and gameplay.

5/ What's been the worst thing about making it?
Morale fluctuations! We seriously underestimated how long it would take to animate all those units, create all the art assets, we've been working for 1.5 years on a game that we thought would take 6 months. We drained our funds as well. It's hard to stay motivated for such long periods of time, especially for small teams like ours. But we're still as dedicated as ever!

6/ What made you decide to do a KickStarter?
We need to stay true to our vision. We know publishers stay clear of untested ideas, and a casual strategy game (with cute visuals too) is an untested idea. Our attempts to get funding have resulted in Publishers (who loved gameplay) to meddle in creative decisions. Isn't that why most indie gamedevs stay indie? Some publishers patronizingly wanted to market our game to toddlers, and some wanted more muscular men and naked women in a tactical game.

7/ If you get fully funded, how long will it take to complete making the game?
6 months. We're hiring a fantastic coder, we'll be distraction-free with our rent paid, and can fast-track this

8/ What advice would you give to aspiring indie devs?
Be transparent about your project from the start. We weren't, for fear of having our idea "stolen", but that's just a risk we'd take, in hindsight. Nothing beats peer review of your work, and fellow indie devs have a vested interest in making each others' games better. After all, that pushes you to become better yourself.


Many thanks to Christina for agreeing to the interview, and I wish her and the team success in getting the game funded and made.  I’m personally very interested in seeing how those later levels look – complex gameplay wrapped up in a very simple interface is a tricky thing to get working, but it’s brilliant when it does.