New York, New York - Today New York indie developer aukStudios LLC released "ins and outs," a free maze-like puzzle game for iOS and Android. "ins and outs" is the first mobile puzzle game developed by an indie studio to allow players to seamlessly synchronize their progress across both iOS and Android devices. A player simply logs in with Facebook and plays as usual. All of their enabled devices remain in sync automatically and seamlessly without any further interaction from the player. 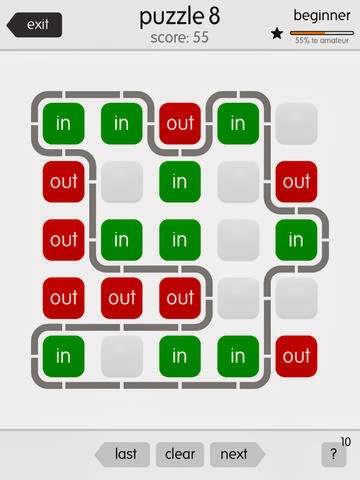 Mobile gamers are often disappointed to discover that their games do not synchronize across their devices, even for mainstream titles developed by professional studios. Mainstream titles that do offer synchronization typically do not provide a seamless cross-platform experience. They either require the user to create a separate account with the game studio (such as Rovio's Angry Birds), or they use Apple's iCloud to synchronize on iOS devices but fail to synchronize with Android devices (such as ZeptoLab's Cut the Rope). King's global sensation Candy Crush Saga is one of the few mainstream titles to offer seamless cross-platform synchronization, but to date, no mobile puzzle game developed by an indie studio has implemented the feature.

"It's remarkable that so few mainstream titles offer cross-platform synchronization considering how frequently users demand it and how straightforward it was to implement as an indie developer," says aukStudios LLC's founder, CEO, and sole developer Andrew Kallem.

Description:
"ins and outs" gameplay involves a simple yet addictive puzzle concept that players of any age learn to play in seconds. Puzzles consist of a grid of squares, and players solve them by drawing a loop so that the squares labeled 'in' are inside the loop and the squares labeled 'out' are outside. Players can play casually at their own pace or compete against their friends on Facebook. In casual play mode, players earn points by solving puzzles in order to earn promotions to higher ranks. In competitive play mode, players earn as many points as they can within one minute, competing for a spot on the global leaderboards and daring Facebook friends to beat their score. Larger puzzles are worth more points, and solving a puzzle without lifting one's finger earns bonus points.

Pricing and Availability:
ins and outs 1.2.1 is free and available worldwide through the App Store and Google Play in the Games category.


ins and outs 1.2.1: http://www.insandoutsgame.com
Download from iTunes: https://itunes.apple.com/app/ins-and-outs/id660288767
Download from Google Play: https://play.google.com/store/apps/details?id=com.aukstudios.insandouts
YouTube Video: http://www.youtube.com/watch?v=aBVIEpkURQw
aukStudios LLC is an independent mobile game development studio founded in 2012 by Andrew Kallem. A native New Yorker, Andrew has always enjoyed and been inspired by games, especially puzzle games. He started programming at age 12 and can solve Rubik's cube in about one minute. Having previously worked in finance and management consulting, he is now a master's student in computer science at Columbia University.