"What’s the longest you’ve been without electricity? An hour? Two? A day? Whatever you’ve had to deal with, the island of Cedaria probably has you beat - it’s been several months now, and the end is nowhere in sight."

This game looks very interesting indeed for several reasons, check out the video below for some of them:


Cedaria is a top-down 3D adventure game in a Middle Eastern steampunk setting. It features crafting, an extensive dialogue system and multiple dynamic endings that are affected by how you play the game. 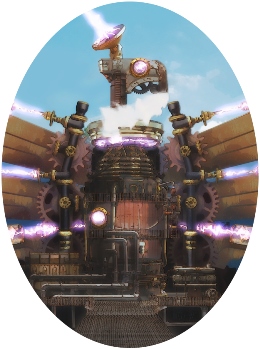 The game takes place on an island in an alternate reality, some time at the end of the 19th century. As a player, you will be returning to your homeland, Cedaria, after several years of absence, having heard that the island has flourished under the patronage of the one and only Phoenix, a brilliant machine unlike no other, invented by a certain Lawrence Audlington who thought electrical cables were too old-fashioned and unbecoming, thus giving birth to a wireless method to distribute electricity. You’re under the impression that your island has become an epic place, prosperous, brightly lit and exceedingly busy. So it comes as a shock when your steamboat nudges the docks of Angel Wharf and all you see is darkness.

As you poke about, you learn that someone has sabotaged the Phoenix, and the whos and whys of the case still remain a mystery, and you soon realise that the many changes the island underwent during the last few months have already started to affect you… you are trapped, just like everybody else. The only way out? Fixing the Phoenix of course… only after you find its ten missing parts that have been scattered, one way or another, all over the island. Piece of cake.
Or is it?


Your decisions, no matter how simple, will determine how everything plays out. If you play your cards right and assemble the Phoenix, you may be able to reconcile the different segments of the population and become a hero. But then again… there’s no rule forcing you to be “good”.

Several Storylines: There are a number of storylines in the game; this increases replayability and offers more dynamic and choice-based endings.

Who-Dun-Its: The storylines revolve around who or what sabotaged the Phoenix, and you will have to find clues leading to the identity of the culprit, rather than just find and assemble the machine parts.

Crafting: You will be able to craft items that will help you in your quest to restore the Phoenix machine to working order.

Dialogue System: Our dialogue system offers extensive conversation trees with multiple outcomes in every interaction. Since this is a choice-and-consequence game, dialogue plays an important part in the final outcome.

14 Zones: The island has 14 unique zones that you are free to explore at your own leisure without having to get any pesky achievements beforehand.

Multiplayer: Multiplayer is supported throughout the game; Cedaria plays equally well in both singleplayer and cooperative modes, and includes common tools such as a chat window and a lobby to facilitate multiplayer


Fundraiser started just yesterday, 14 backers already, a reasonable funding goal ($7,000) and just $10 for a DRM-free digital copy of the game... and it's steampunk! I have a very strong feeling this one will be successful.  Check out the Cedaria: Blackout IndieGoGo Page.