Looking for something, are you? Find something you might!

“4.3 is a huge update in the history of Unity,” said David Helgason, CEO, Unity Technologies. “The addition of 2D tools is an important milestone that will help developers make incredible 2D games, and with major improvements to Mecanim and greatly increased performance, this is a weighty, productive update that we’re thrilled to release.”

Unity 4.3 is now available for download and introduces a massive variety of updates, improvements and new features that include:
2D Development Tools
While Unity has been used to create thousands of excellent 2D games, Unity 4.3 introduces new 2D development tools and metaphors specifically designed to streamline 2D workflow. Manipulating and optimizing 2D assets is made easier with the addition of a new Sprite Texture import mode, automated atlasing, an optimized 2D rendering, and drag-and-drop functionality for scene creation. Box2D physics have been integrated into Unity for better performance, stability, and smaller game builds. Additionally, polygon collider generation from sprite textures means quicker creation of accurate, but fully editable, physical collider meshes for refined physical response between objects in a scene. 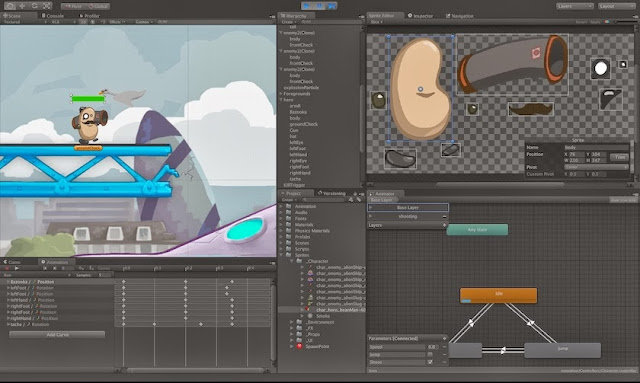 Umbra 3 Occlusion Culling
Occlusion Culling in Unity has been rewritten for the upgrade to Umbra 3. Among other benefits, baking is much faster and generates much more accurate and better performing results. Rapid iteration allows for much more sophisticated environments containing highly detailed graphical content.

Additional Improvements
Unity 4.3 includes a slew of additional upgrades and additions, including major improvements to dynamic Navmesh creation, the "Optimize Transform Hierarchy” feature to reduce characters to a singular object instead of a 100 pieces, MonoDevelop 4.0.1, editor layouts saved by project, multiple shader enhancements, Plastic SCM integration, and a slew of Windows Store Apps updates. A complete list of improvements can be found in the Release Notes.

Unity 4.3 is available now and can be downloaded at http://unity3d.com/unity/download.