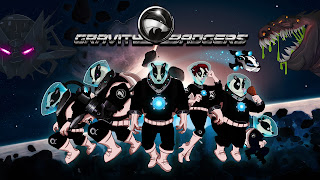 Cardiff, United Kingdom - Wales Interactive today introduces Gravity Badgers 1.0 for Mac with a launch discount of 50%! Step into the space suit of valiant Gravity Badger Captain T Bayback as he ventures into the deadly depths of deep space to save his friends, family and the universe itself from the threat of the deadly Evil Honey Badgers, aka the Hellsett. Featuring stunning eye candy HD graphics, a mind blowing 140 challenging levels, five big boss levels and an amazing soundtrack.*Launch offer ends December 2nd.

Step into the space suit of valiant gravity badger Captain T Bayback as he ventures into the deadly depths of deep space to save his friends, family and the universe itself from the threat of the deadly Evil Honey Badgers, aka the Hellsett. For the first time ever a game unites the thrilling elements of Badgers and Gravity to create a stunningly presented physics-based puzzle game that will take you beyond the realms of possibility, imagination and logic to the star-dusted realm of the Gravity Badgers!

Throw yourself into the planets' gravity, dodge asteroids and unyielding deadly bosses in over a hundred levels of vacuum-filled adventure and danger, all united under a stunning art style reminiscent of all your favourite 80's cartoons complete with a thumping mullet rock soundtrack!

The game has highly addictive physics-based action with 140 challenging levels and stunning HD graphics. And if that wasn't enough it also has five big boss levels including the giant Space Worm, the deadly Doomsphere and five Gravity Badger characters to unlock. Couple this with an amazing soundtrack and awesome graphics; this really makes Gravity Badgers a quality game that you'll keep coming back to.

Pricing and Availability:
Gravity Badgers 1.0 normal retail price is $5.99 but offered at a special launch price of $2.99 and is available worldwide exclusively through the Apple Mac App Store in the Games category (*50% discount ends December 2nd 2014)


Wales Interactive is a BAFTA Cymru award winning Indie games developer and publisher. Our core team has over 20 years professional games development experience and our wealth of expertise has been built up over the years working on a range different platforms and published products that over that time that have sold millions worldwide. We specialize in the direct download markets including PSN, Wii U, iOS, Mac, Android and PC platforms. Our aim is to make unique games that entertain the world.