Dino Palooza - tower defense - is absolutely Free for a weekend

Florianopolis, Brazil - Celebrating its brand new office, independent studio Cat Nigiri is giving out free copies of Dino Palooza, from March 3 to 4, to all their fellow iOS owners. Hurry up, get this amazing Tower Defense right away and send those dinos back to the past.

Dino Palooza puts another spin in the popular tower defense genre. Set in the late Cretaceous Period, the game tells the story of a small team of scientists (from the future), imprisoned in a prehistoric jungle, struggling to both fix the timeline they broke and surviving the wrath of Professor Nigel Racik, to whom dinosaurs should have ruled the earth forever.

In Dino Palooza, the player does more than watch the guns take care of the bad guys. Players actively fire the cannons, place the barricades, and slow the enemies down. The unique touch-based control of your arsenal, along the player's ability to reroute dinosaurs and make mazes puts tactics and action in a whole new perspective for the genre. Dinosaur types differ from each other in many ways beyond the regular speed and strength progression normally seen in Tower Defense games. Dino Palooza is a frantic, action-packed strategy game unlike anything you ever saw. 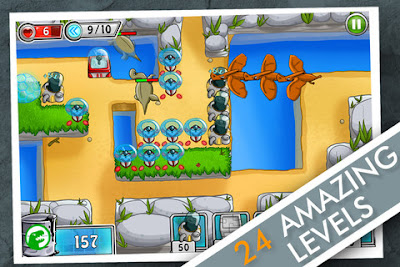 Pricing and Availability:
Dino Palooza's regular price is $1.99 USD (or equivalent amount in other currencies). From March 3 to March 4, the game will be completely free. Dino Palooza is available worldwide on the App Store in the Games Category.