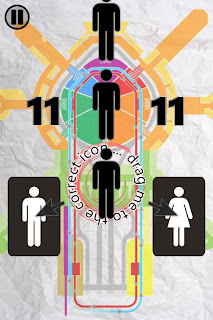 Vienna, Austria - February 16, 2012 - There is chaos at the airport and it's not because of security checks. Passengers are frustrated by occupied restrooms and often have no choice but to take their business elsewhere.

This is the introduction to Occupied Forever, a game that's now available for free on the iPhone & iPod Touch.

Your job is to end the chaos by optimizing airport restrooms. It pushes you through increasingly frantic levels where you have to take care of kids and androids mixed with men and women and even the occasional terrorist. Enjoy the funny breaks at the level intros but make sure that the passengers don't miss their flight!

Occupied Forever Free can be downloaded from the App Store:
http://itunes.apple.com/us/app/occupied-forever-free/id488184294?mt=8

After you are done you can practice your Zen in the full version of the game. Each level comes with its own haiku, mostly to confuse the player. You will achieve the title of "Master" if you don't let yourself get distracted by that fly.

The full version can be downloaded here:
http://itunes.apple.com/app/occupied-forever/id454009590?mt=8

Mr. Christian Zangl is an indie developer, living in Austria, who likes to build fun games, mostly at night when other people are sleeping. He is not particularly fond about writing press releases though he hopes that you have enjoyed this one.


Don't forget you can also keep up to date by adding the Indie Game News Google+ page to your circles.
Labels: iphone, ipod touch, new release