Newcastle Upon Tyne, United Kingdom - A Father and Son team have developed a brand new mobile game for iPhones and the iPod touch. Tyler Mckellow, aged only 7 years old, worked with Dad, Philip for over a year to create the game, "Spud Gun Attack". 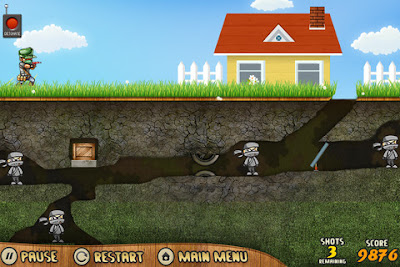 Like most young children, Tyler was a huge fan of computer games, but as explained by Dad, Tyler was to develop more of an interest in how games worked and how they were created. Philip explains, "Tyler from a very young age has always been into art and drawing in general, but when Tyler started to get interested in computer games, he started to come up with ideas for games that he would like to play and ideas for brand new games. So Tyler began to sketch down ideas and explained exactly how those drawings would work in a game environment".

With Tylers designs and ideas, the idea for the game was born. Philip began the process of programming the game, and developed Tylers ideas and integrated then into the app.

"Spud Gun Attack" was born. The concept of the game is simple. The main character, "Spud" must use his Spud Gun to point, aim and then fire at the targets, with a wide range of varying levels with increasing difficulty.

The Physics based puzzler requires the game-player to use their initiative and plan their shots with precise timing to be able to defeat the targets.


Pricing and Availability:
Spud Gun Attack 1.01 is only $0.99 USD (or equivalent amount in other currencies) and available worldwide exclusively through the App Store in the Games category.

TyneSoft was created to house the "Spud Gun Attack" game. The philosophy behind this game is simply to have fun. TyneSoft is a Father/Son team and any future games will be created by Philip and Tyler together.
Labels: ipad, iphone, new release, shoot-em-up