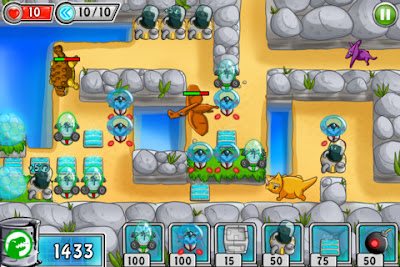 Set in the late Cretaceous Period, the game tells the story of a small team of scientists (from the future), imprisoned in a prehistoric jungle, struggling to both fix the timeline they broke and surviving the wrath of Professor Nigel Racik, to whom dinosaurs should have ruled the earth forever. In Dino Palooza, the player does more than watch the guns take care of the bad guys. Players actively fire the cannons, place the barricades, slow the enemies down, and much more.

Pricing and Availability:
Dino Palooza 1.0.1 costs only $1.99 USD (or equivalent amount in other currencies) and will be available worldwide on the App Store in the Games Category. Launch Special Price $0.99 USD is being offered for a limited time.