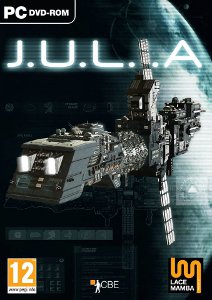 Popuvky, February 20th, 2012 – J.U.L.I.A., the upcoming science fiction adventure by Czech developer CBE software, will arrive in UK and Irish as a retail on March 2nd, 2012. In addition to the retail version, a digital download version will be available worldwide on the same date as confirmed by J.U.L.I.A. publisher Lace Mamba Global.

J.U.L.I.A. is a narrative driven adventure game in a science-fiction scenario: In the year 2430, Rachel Manners, a 35 year old astrobiologist and member of an elite group of scientists, which is sent off in a giant space ship to mankind’s most exciting space mission: to explore the first ever discovered extra-terrestrial life-forms.

After a long journey, Rachel suddenly awakes from a cryogenic sleep. She has no idea why she has been put into this hibernation, elusive memories to what happened before and just starts to find out that she is the only human survivor of her team. To make things worse, their space probe, currently orbiting an unknown planet in a far-off solar system, is severely damaged. Together with her now only companions – J.U.L.I.A., the spaceship’s very temperamental artificial intelligence system, and Mobot, a huge reconnaissance robot, Rachel now has to solve the mysteries of the events on board the space vessel, repair it and explore the unknown planet. It won’t take long until she encounters first extra-terrestrial life-forms…

Players are taking over the control of Rachel, and have to utilize the Mobot as well as J.U.L.I.A. During their adventure, they will visit six different planets.

With a solid distribution network throughout the world, Lace Mamba Global is publishing games of all genres, such as the upcoming RTS games of the critically acclaimed Men of War series, Men of War: Assault Squad and Men of War: Vietnam. Lace Mamba Global has become one of the leading publishers of adventure games with already released or upcoming genre highlights such as Tales of Monkey Island™, Gray Matter, Black Mirror 2 and 3 and A New Beginning.


Lace Mamba Global is the ideal partner for independent developers that want their product delivered to a worldwide audience both in retail and digital form.
www.lace-mamba.com


Don't forget you can also keep up to date by adding the Indie Game News Google+ page to your circles.
Labels: adventure, announcements, pc