We saw your video and it was crazy!  How did your E3 video come about?

Well I was laying in bed the night before E3 and it just hit me. Why did I need a booth to show Rainbow Star Girl? Why not just go up to my target audience... girls... and show them the game... see what they think.  At one point I just camped out in front of the Nintendo booth and showed my game. I was 10 people deep. It was awesome! Meeting so many great ladies and getting great feedback on the game.

It just screams indie to me. There is no blue print for the future of games. Anything is fair game at this point... including how, and where, you show people your games. I think if you try to imitate the established way of doing stuff you are cutting yourself off from a whole new world of possibilities.

Bathroom booth... How did you think of that one?

I thought it would make a great visual statement on the game industry... Indie game in the bathroom at E3.  I went in there and just asked some random guy to film. It turned out he was an indie too, so we got along great.

You TROLLED developers? Hilarious! Were they annoyed?

Haha. No... I think they thought I was odd. No one was offended at the time :). A few of them have e-mailed and said how much they love the video/game.

I have worked in the game industry for years and been to E3 many times. Developers tend to take their games WAY too seriously... me included. I thought it would be fun to exploit it our seriousness. I mean, who in their right mind would put their main character in sparkle pants?

Girls love your game! What is your secret?

It seems like 99.9% of games are made by guys. So being the macho men we are, we don’t like making girly stuff. Or when girly stuff is made, it is for a paycheck and for some crappy corporation to push their latest doll. The game itself is an afterthought. I think women need, and want, their own video game experiences. In Rainbow Star Girl they sense it is genuine and for them.

How are you creating Rainbow Star Girl?

I do it all myself, with the help of the geniuses at Epic. Rainbow Star Girl is created using UDK. I use kismet to do the coding. Kismet is manna from heaven. I do all the artwork in blender and Zbrush. I do music in Fruity Loops. All the marketing and videos are done by me.

You do the game yourself?

The tools are so great now. When I started in the business, it was a very foreign concept that someone could create and distribute a game by themselves. To wake up and find myself living in this reality... Well, it is a dream come true.

I am rather obsessed by the concept of doing it all myself. I think it is the wave of the future in games. In coming years you will see more and more artists like myself. I mean traditional artists don’t get help on their paintings do they?  It is their artistic expression...their voice. I want to treat games with that same reverence. Having artwork come from a unified voice is something the game industry doesn’t have much of.

Games are usually designed by 30 designers, 80 producers, and 1000 marketing guys. The result is usually something bland and dumbed down for the masses. I have made games in that world and it just doesn't interest me anymore. Life is too short to be a cog in a big corporate wheel of marketing driven creativity.

Do you think a big company would make something like Rainbow Star Girl.

No... But if it is a success, they will. They are great at cloning. Taking other people’s imagination, because they lack it. Rainbow Star Girl is not an easy game to pitch to an executive. “Hey Suit, let’s make a game with no killing, only kissing, and fill it with rainbows and bubble wands.” They would laugh me out of the room. As well they should :). Because they wouldn’t make this game, it is precisely why I want do to it.

So why the is the game so pink and girly?

The style of Rainbow Star Girl is me trying to stretch myself as an artist and exorcise my demons... big pink demons. I have a little girl, and when she was born, I told my entire family not to give us any pink stuff. They did the opposite. Now I am drowning in a world of pink. Barbie, princesses, etc. I can’t escape it. It has consumed my house. My daughter loves it, so I tolerate it, but at my core it is my worst nightmare come alive.

It opened my eyes to a colour I never explored, and an art style I never explored... I have always been the dark, brooding artist type. Lots of blood and gore in all of my work. Sick, horrible images. But, I think they were always me trying to figure out what other people thought was horrible and horrific. I just found them cool... They didn’t really scare me, though. Rainbow Star Girl is what scares me, or at least it used to, before my daughter! But I love it, doing stuff I have never done before artistically is the only thing that motivates me. 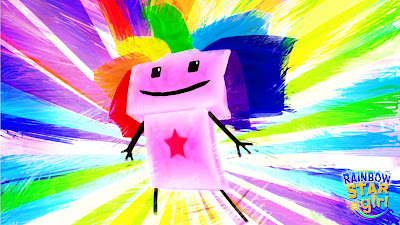 You mention your daughter. Does she play the game?

She is lead designer on the game! If she doesn't like it... I don’t put it in. An example would be enemies. I put in lions that would eat the cows. Nothing too bad... If a cow got to close to a lion, a chomping noise could be heard and the cow would disappear. Standard game stuff, but my daughter was disturbed by it and HATED it.

A few hours after playing the game, my wife and I were driving with my daughter, and we were passing a cemetery. She asked my wife “Mommy, will I die like the cow? “ and my wife and I looked at her and decided to tell her the truth “yes.” She then started crying, while saying “Can’t you make me not die?“ It was horrible and heart breaking. I took out the lions later that day.

No killing... Only kissing. The game is definitely aimed at all ages, though. It is a game about kissing animals, pure silliness.

My daughter even came up with the name. One day she marched into my office and said, “Daddy, call me Star Girl!” I thought it was great, but copyrighted. So I added a Rainbow to it :). 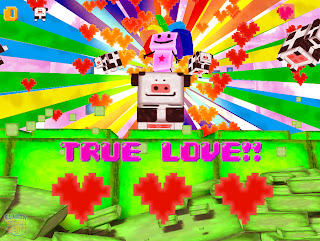 Yes... Revolutionary, right? Haha :). I handle the kissing in a very cartoony way, though. So, it’s cool.

After working in the game industry for 15 years I realized that every game I had ever made was a “kill simulator.” I worked on True Crime, LA, and New York. You play as a police detective, but all you do is basically just drive around and shoot people. I realized that 99% of the games that come out are about killing or hurting something. That sucks. I think it is a statement on our society.

Now, don’t get me wrong! I LOVE violent games. I play Left 4 Dead and Battlefield a ton, but I don’t feel the need to make one of them. It is just done to death. There are so many other ideas out there that haven’t even been explored yet in games.

So I am making a game about kissing, trying to do something different. At my core, I just want to do stuff different and try to be original. I think that is why people responded so positively to Rainbow Star Girl. People LOVE the game when they play it. They see the goal and the message right away and sense it isn’t like the other stuff. It is different to kiss stuff in an action oriented way :). Everything in the game is a celebration of life. Girl gamers enjoy experiences like that.

Will you ever make a violent game again?

Hells yes! I love violent games, but I will never make a Call of Duty clone. My idea of violence is much different. I have one that I am working on called “Moments of Death”  where you have to keep the main characters breathing. If you don’t he dies. Very high concept and unsettling :).

When does Rainbow Star Girl come out?

Well, Rainbow Star Girl still has a few months to go. It should hit before Thanksgiving :). To keep up to date, go to my Facebook page and follow Rainbow Star Girl :). I post all of my updates on there. Make sure to hit the LIKE button!