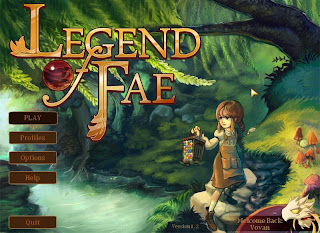 Legend of Fae is a game that blends match-3 puzzle mechanics with RPG elements. Much as that sounds like a recipe for a really boring game, it actually works extremely well. Part of that is due to the nice fantasy storyline, which hardly treads new ground but is well developed in itself with a likeable protagonist – but mainly due to the way that the puzzle aspect is integrated with a truly satisfying battle system that feels much like a traditional RPG. While levelling up and quest elements of the game are somewhat limited, it concentrates on making what tends to be the most boring element of 2D RPGs – battles that usually have you repeated stabbing the spacebar without thinking much about how to win – into a really enjoyable part of the game.

Much relies on the way additional abilities are introduced to the game, keeping it feeling fresh throughout. You have many Fae monsters to battle, as you bid to find out what’s happened to your uncle and unravel the mystery of why you can talk to Fae creatures when others can’t (four team up with you early on, thus granting you your magical abilities). The game takes the match-3 concept and expands it in interesting ways, which in turn allow you to use various forms of attack and defence, as well as other abilities. Of course the creatures trying to stop you can also use Fae magic, and the resulting battles can get really quite frenetic.  The boss battles are also fun and some are really challenging, and the level-up system, while simple, is well implemented. 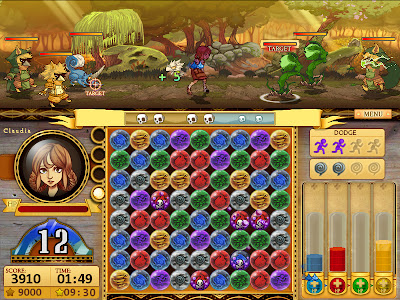 The graphics are very nicely done, reminded me a bit of The Spirit Engine. It’s all very bright and colourful, appropriate for the game’s atmosphere, very easy to see what you’re doing, and a good amount of detail.  The interface works really well once you get used to it, and the music’s nice enough. (I think I heard a few RPG Maker sound effects now and again? Not a criticism, just an observation!). The game’s a reasonable length and has some replay factor.

All in all, Legend of Fae is a game I enjoyed a whole lot more than I thought I would. Thoroughly recommended, and that’s if you’re an RPG fan too. I’ve never seen the puzzle and RPG genres combined to such good effect.  If you want simply a pure RPG or a relaxing puzzle game it isn't for you though.