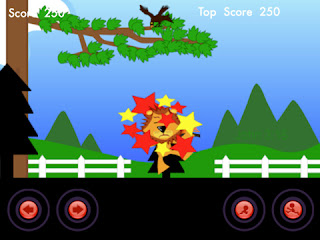 The family friendly iPad game allows you to play as Andy the Lion, and your goal is to dodge the Tricky Crows™. Use the controls to crouch, jump, and run to avoid the Tricky Crows. Developed by Suspicious-Activity.

ST. LOUIS, MO March 22, 2011 -- Andy VS Tricky Crows™ is an iPad game now available and the first of many family friendly games with a Christian message to be released in 2011. The game is rated 4+, which means it contains no objectionable material.

The art and game was developed by John Nelson. It is an entirely indie effort to develop a game for children. The story line is based on the family friendly and Christian themed Andy the Lion & Friends™. Additional games and storybooks will be released this year for children.

Gameplay
The 2D game is played played in a side scrolling point of view. The player must dodge the Tricky Crows. Use the controls to crouch, jump, and run to avoid the Tricky Crows. Try to beat your previous score, or the score of your friends.

Release Date:
The game has been officially released on March 18, 2011.

About Suspicious-Activity:
Interactive entertainment developer John Nelson of Suspicious-Activity is an indie startup. As an Apple platform developer, John develops applications for the iPad, iPhone, and the Mac. The company is located in the Midwest United States in the St. Louis metropolitan area.