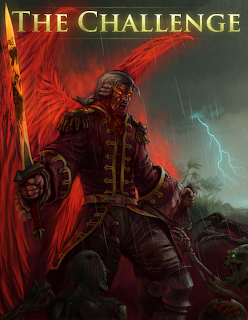 Gothenburg, Sweden - March 22, 2011 The team behind upcoming zombie slaughter game Dead Meets Lead today released a free-to-play, single level version of the game called The Challenge. Simultaneously, the release date for the full game is officially set to be May 3, 2011.

The Challenge is a specially designed single level version of Dead Meets Lead. As the name might imply, it is constructed to be truly difficult to complete. For those who do complete it awaits the reward of getting their name inscribed into the official Hall of Fame on the Dead Meets Lead website.

The map starts with The Captain finding himself in a small glade in the depths of the swamplands. He senses that something is wrong with the place, but before realizing what is about to happen he is swarmed by zombies. Having no choice but to stand his ground, he heroically defends himself against several waves of attacks, each wave harder than the previous.

"We've done quite a bit of testing with this map, both in-house and with our beta testers from the forum, and we're really positive about the outcome. The idea with the map is to really tease all the competitive and skilled gamers out there in a 'How far can you get' kind of way. The map is by no means impossible, but if you want to be among the lucky few on the Hall of Fame, be prepared to play this map a few times."
- Fredrik Norén, CEO, Keldyn Interactive

For more information and download links go to: http://deadmeetslead.com/the-challenge.

Dead Meets Lead ™ is a challenging zombie-slaying action game set to be released on May 3, 2011 for PC. The game is centered around an 18th century character known as The Captain, who is on a mission to obliterate evil from a zombie-infested island in the Caribbean.