Austin based game studio, Retired Astronaut Collective, LLC today introduces Squabble 1.0 their new free word game for iOS devices. With unquestionable educational value, this online multiplayer word game gives users an amazing opportunity to expand their vocabulary and have fun at the same time. Squabble is a social game that takes advantage of the networking capabilities of iPhone, iPod, and iPad devices. Users may play online with Facebook friends or with a random opponent.


Austin, Texas - The Retired Astronaut Collective, LLC to is pleased to announce a new free word game known as Squabble for iOS devices. Players go head to head to match their wits and their vocabulary in this multiplayer, online app. In Squabble, users frantically build the longest word they can in a short time limit. Each letter scores points, but some letters are worth more than others. Using the bonus spaces, players can double and triple their letter points. The final round has a long secret word they can decipher for an even greater score.

Squabble is a social game that takes advantage of the networking capabilities of iPhone, iPod, and iPad devices. Users may play online with Facebook friends or with a random opponent. 'Play and Pass' mode lets users play with a friend on a single device. In between rounds, players can chat live with their opponents or check on definitions of played words with the integrated dictionary. A robust ranking system will let players see how they match up against their friends and players around the world.

"Squabble is an addictive gameplay with a twist. You'll have fun and you just might learn a new word or two". - said Chris Chuter, co-founder of the Retired Astronaut Collective. 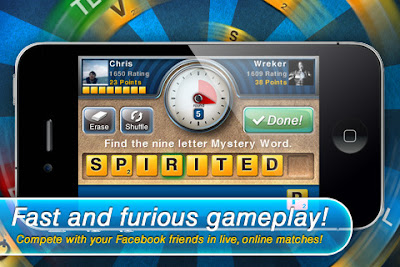 Pricing and availability:
Squabble 1.0 is free of charge and available exclusively through the App Store in the Games category.