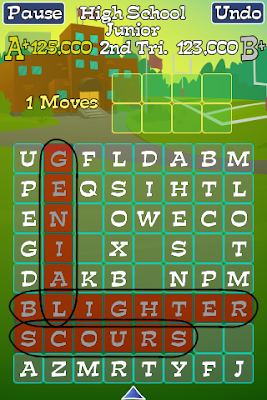 Kirkland, Washington - Perplexo Words, by Carried Away Games, is an original word-building game that combines elements of word search, crosswords, anagrams and other popular games in the word genre. Perplexo Words features head-to-head play through Game Center, giving players the chance to test their English skills against a friend or random opponent. You can also play through the 48-level, single-player campaign. The design promotes the replay of game levels resulting in many hours of word-tinkering fun.

In the game, you examine the game board, identify good places to spell words of four letters or greater, and then rearrange the letters by tapping the letter, and then the destination. Utilize the Pool, like your hand of letters in other word games, to save important letters for use later. Spell as many words as possible (left-to-right and top-to-bottom) before your Moves run out.

* Scan the array of letters in the game board at your own pace
* Identify good places to spell words, as long as you have Moves left
* Spell long words to maximize your score
* Complete level tests to receive bonuses
* Once spelled, the letters of a word lock
* The challenge increases as the board gets filled with words
* The Pool provides a place to store letters for use later
* Build combos--words spelled vertically and horizontally in one drop, similar to crosswords
* Use special Multiplier and Wild letters to receive a big boost to scores
* Work your way through 48 single player levels
* Play against friends through Game Center
* Compare scores in Game Center

Pricing and Availability:
Perplexo Words 1.0 is on sale for $0.99 USD (or equivalent amount in other currencies) and available worldwide exclusively through the App Store in the Games category.

Carried Away Games is an independent game developer formed in 2008 and made up of mainstream game industry veterans. We have worked with a number of the largest game publishers and developers, and are authorized developers of all major consoles through our subsidiary. Our goal is to create compelling, high-quality games for a wide audience.
Labels: ipad, iphone, ipod touch, new release, word games