Hungry Helga HD is hoping to prove that bigger is indeed better by crashing onto the iPad gaming scene with a big splash. Hungry Helga is a fast-paced action game from new indie game developer, Grid Monsters. It features beautiful graphics from an award-winning artist and original music. What does it take to keep a Viking woman happy? Hungry Helga promises simple but addictive gameplay for the casual gamer.

San Diego, California - Indie game development company Grid Monsters today is pleased to announce Hungry Helga HD 1.0 for the iPad. Hungry Helga HD is hoping to prove that bigger is indeed better by crashing onto the iPad gaming scene with a big splash. Players take on the role of a beleaguered viking captain who needs to feed fish to his ornery and ever-hungry wife, Helga. Helga needs to continuously eat or she will lose her temper and destroy the player's boat.

Early reviews have been positive:
"Hungry Helga is a fun and charming game, with a bit of that 'one more go' addictiveness. " said a reviewer from AppAddict

"Crisp, loud graphics packaged into a slightly insane game scenario guaranteed to immerse your senses." said a reviewer from AppVader

Hungry Helga features:
* Simple but addictive gameplay
* Progressive difficulty with faster fish and other obstacles
* A unique superpower in each scene
* Changing scenery and weather
* Fun art and animation with original music
* Players can listen to their own music while playing too
* Local leaderboard (Game Center coming in the future)

How Do You Keep a Hungry Viking Woman Happy?
Players tap on the screen to fire cannonballs at the fish. Once the fish float to the surface, players can move the ship over them by tilting their device or swiping the boat. When the boat reaches the fish, the first mate will automatically scoop them into Helga's mouth.

While the game starts out easy to let players get used to the controls and allow casual gamers to get into the game, over time the fish get harder to kill requiring the player to bomb more strategically. Sharks and seagulls will compete with the player for the limited supply of fish and icebergs will prevent the ship from moving until they've been destroyed. Hardcore gamers can try to maximize their score even on earlier rounds by increasing their skill bonus: the faster Helga eats, the more points you'll get.

Once Helga has eaten enough, she reaches a state of nirvana and can call on the gods for assistance.  Players can tap Helga's spinning halo to activate one of her unique superpowers. The powers range from bolts of lightning to beams of sunlight strong enough to boil the fish out of the water. If Helga doesn't get fed, she gets skinnier and angrier, eventually throwing a fit that will destroy and sink Kjirk's boat.

Pricing and Availability:
Hungry Helga HD 1.0 is $3.99 USD (or equivalent amount in other currencies) and available worldwide exclusively through the App Store in the Games category. 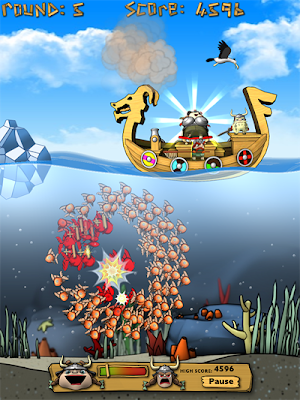 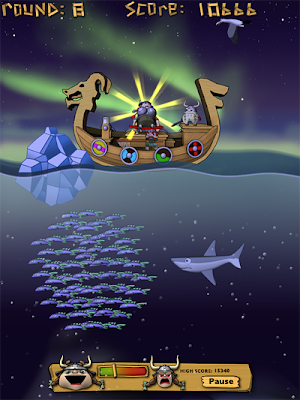 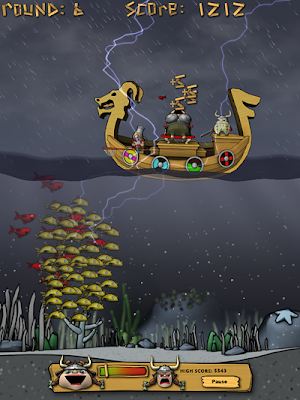 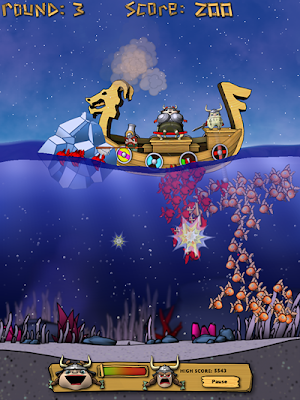