smuttlewerk today announces their new and upcoming game, Companions. "Companions" will be a top-view "RPG/Dungeon Crawler" for Apple's iPad, where you lead a team of four characters into real-time battles against the false god "Detexx" and the "Hordes of Nether". The game will be playable as a campaign with a full-fledged storyline or as a single-map experience, packed with achievements and leaderboards. 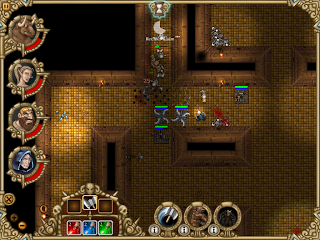 Limburgerhof, Germany - smuttlewerk today is pleased to announce their new and upcoming game, Companions. "Companions" is a top-view "RPG/Dungeon Crawler" for Apple's iPad, where you lead a team of four characters into real-time battles against the false god "Detexx" and the "Hordes of Nether". The game is playable as a campaign with a full-fledged storyline or as a single-map experience, packed with achievements and leaderboards (Gamecenter & OpenFeint). Both modes are single player only.

The game contains elements of "Roguelike" and "Dungeon-Crawler" games, as well as RPG and action-tactics elements. Maps and characters are displayed in 2D top-view. The characters have skills. Like other RPG's these skills utilize a cooldown mechanism, so timing is very important. These skills get better if the player chooses to level them up. The clever use of the skills is one of the core play elements.

Each race and class favours different weapons and combat techniques:
* The Minotaur is apt in close combat fighting
* The Dwarf builds traps and tower structures
* The Elf uses her deadly long-range weapons
* The Human is gifted with powerful magic spells

There are three classes available for each race and every class has unique skills and bonuses. Each class plays differently, so lots of replay value is guaranteed. The map sizes vary from huge to small. Different goals on each map lead to different experiences of how the game is played. Sometimes portals leading to the nether-plane must be closed, other times survival for a given time is the objective, to mention just two.

The game is played in real time, but through the use of the tactical pause you are able to issue orders to your characters while the enemies are paused. Enemy creatures vary in type and strength. Some are quick, some cumbersome, while others favour ranged combat instead of close in fighting. Bosses usually have special skills of their own, making them especially deadly.

Localization
The game will be published in English and German. Other languages will be integrated after the game has been released.

Release Date
The game will be released in May 2011. The release will feature the campaign mode with an engaging story line and a survival mode featuring achievements and leaderboards.


smuttlewerk is Martin Giaco and Ralph Kunz: two long time friends who decided to put their skills and their love of games to use. Besides making games we are playing together in a hardcore-band called Hostile HodgePodge for more than 15 years, so except some guitar heavy music in some of our games. smuttlewerk is a fantasy word Ralph created for our drummer, we called him a smuttlewerker and we liked the word so much, that we decided to use it for our business. We love what we do and we're sure this will be resembled in our games. Copyright (C) 2011 smuttlewerk. All Rights Reserved. Apple, the Apple logo, iPhone, iPod and iPad are registered trademarks of Apple Inc. in the U.S. and/or other countries.
Labels: ipad, preview, rpg