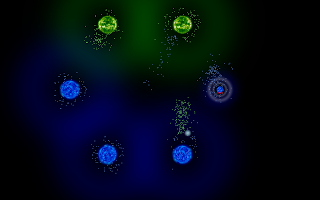 Auralux is a very simplified real-time strategy game that minimalises everything down to a single element - one type of base (although three sizes, which means three production speeds), and one type of unit.  You face two AI opponents across 15 levels - with the bases set in different geometrical shapes.  Once you beat the three toughest levels, you unlock "speed mode" - the same game, same levels, but much faster.

It sounds like an implausible game concept - with no options to build up better bases and units etc, where could the strategy be? - but the game actually plays rather well.  It takes maybe 2-3 games to start getting the hang of it properly, and while your basic strategy doesn't really change, there is a little variation between the levels.  The basic strategy is much the same as I play every RTS with - basically strangle the opposition's supply lines, slowly build up an overwhelming force and launch it all at the enemy's final remaining base in a spectacular finale.  The game is perhaps a little too simplified - once you've completed all the levels there is little incentive to go back and play them again, though you can try to beat your best time.  Apart from your basic strategy, timing and keeping an eye on what your opponents are going, along with working out the best route for claiming bases, is the key to beating this game.  The computer AI isn't very challenging really, but they will still zap you if you don't pay attention!

Graphically it's quite minimalist as well, but it all looks rather cool - especially playing in speed mode when all three competitors are involved in attacking each other, it looks rather like a firework display.  The music's fine too, but my favourite aspect of Auralux is how the gameplay affects the music - when your units attack or are attacked (always resulting in both units being wiped out, as their strength is exactly the same), they make a sound, which is incorporated into the soundtrack.  Since attacks usually involve scores of units at a time, this lasts for most of the level.  (Play the demo... I don't think I've described that very well!). 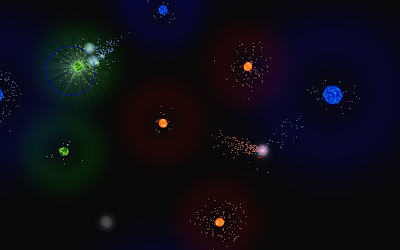 Auralux would appeal most of RTS addicts who need something that can be played in bite-sized chunks.  It's not greatly challenging, and it could certainly do with some extra features, but strategy games that can be played for a only a few minutes at a time if required are pretty rare.
Get the demo or buy the game ($5) at: