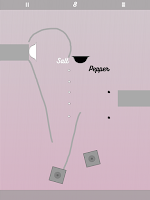 Richardson, Texas - Appdore today is proud to announce the immediate release of Salt & Pepper 2: A Surreal Salty Physics Game, their simply beautiful physics game for iPhone, iPad and iPod touch. Salt & Pepper 2 features over 100 multistage levels. The levels in part 2 have a similar vibe as Salt & Pepper 1, each featuring a unique layout with multiple goals. In order to complete the level, freely draw paths that will lead the spices to their bowls while staying within the drawing level of that level. 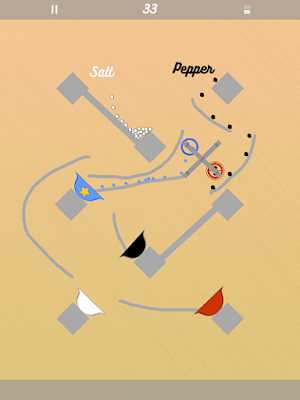 There are more simple asymmetrical layouts this time around that may cause some anger, however since this free version doesn't have any freemium penalties and play timers, you will be free to retry as many times as necessary to complete a level. Just like Salt & Pepper 1, the salt will go into the white bowl and the pepper will go into the black bowl, simple and gradually challenging! To keep the pace faster, each bowl only needs about 10 grains of their respective spice to fill a bowl. There are still no specific paths for these levels as it doesn't involve a grid system. Your solution may or may not work for other players. The progression this time around is to be more of a fair challenge, new obstacles and annoyances will appear, however each stage is passable within 75 seconds.

Salt & Pepper 2: A Surreal Salty Physics Game features an optional donation/level pack called "Salt Divided!" that focuses on salt. This level pack offers 40  multistages within 25 levels that offers more challenging gameplay that removes pepper and has salt doing everything such as being converted into all the other spices. This simple change creates more strategic planning to complete each level. And as a bonus for players, the 1.1 update will include 25 more levels featuring new spices and multistages, available in the first week of November.

Pricing and Availability:
Salt & Pepper 2: A Surreal Salty Physics Game 1.0 is Free (with in-app purchase) and now available worldwide in the App Store. The optional donation/level pack is priced at $1.99.