SUPER Run Away With Me - The side scrolling retro action platformer.

The hardcore retro tie-in game of the upcoming indie Sci-Fi film Run Away With Me. No ads, no in-app purchases, no mercy, ALL ACTION!

FEATURES:
-A unique gameplay mechanic which combines the forgiving modern convention of regenerating health with the unforgiving time restrictions of yore. This results in a constant conflict between offensive and defensive play styles that change with every level. It's easy to get into, very difficult to master.
-9 blistering levels ripped straight out of the movie! Walk through dungeons, race through the desert, fly above a war zone and fight your way through a futuristic city that pierces the clouds.
-3 game modes. Side scrolling platform/shooting levels are broken up by a classic driving section simulating "Mode 7" graphics and a dogfighting level that lets you pilot using your device's accelerometer.
-A branching storyline with over 16 (mostly skippable, don't worry) cutscenes that leads to multiple endings. The story fills in the gaps and presents alternatives to what the movie shows you in a pseudo Japanese-English translated patois for maximum retro authenticity.
-Over 30 authentic Chiptune film soundtrack remixes and original songs. Lots of sampled speech and sound effects from the film all lovingly bitsmashed and degraded for old school cool.
-More than 20 enemy types that will try to stop you on your quest.
-Genuine retro graphics using hand pixellated frames and CG assets from the film overlaid with CRT scan lines for that elusive arcade experience (The irritating kid who offers to push the jump button for you is not provided). 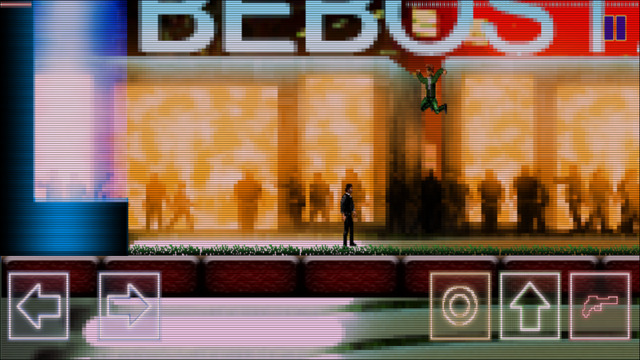 THE STORY:
The future. One of the last remaining cities on Earth. Abraham, a former soldier, has come out of prison for a crime he was forced to commit ten years earlier.   With no way of reclaiming the idyllic life he once led, he accepts work from a mysterious benefactor named Ingram.

Abraham is tasked with a dangerous mission to save humanity. Along the way he forms a relationship with Marja, a strikingly beautiful woman with a link to his past.  All is not what it seems as time runs out and Abraham questions where his loyalties lie.  The fate of humanity hangs in the balance.