5th October 2015, Edinburgh, Scotland - Gyrodisc Super League is a bright, colourful flying disc sports game for up to 4 players. The objective is simple - score goals to reduce your opponent’s points to zero - but victory is seized by quick reactions and devious mind games.


Gameplay/Features:
- Run, dive, catch and throw to keep the disc out of your goal and send it soaring towards your opponent’s. 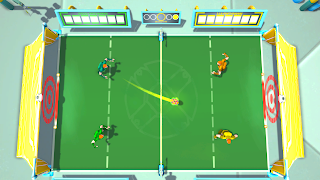 - Throw the disc the instant you catch it for a high-speed perfect return. Chain perfect returns together and the disc gets faster and faster!
- Advanced moves including looping curved throws and wild special throws.
- Play with up to 4 players or AI in either Singles or Doubles

Valiant Interactive is an independent developer of PC games based in Edinburgh, Scotland. To learn more please visit http://ValiantInteractive.com/.