My thoughts after using it

These nifty little devices are based on the Google Cardboard idea - basically turning your phone into an ultra-cheap virtual reality headset.  Well, obviously it's not a real headset, but you can get decent stereoscopic vision through these things.  You just slow your smartphone into the game, run the game / app and away you go! 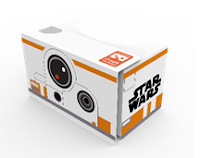 Unfortunately my phone (Samsung Galaxy A3) does not contain a gyroscope, so I was only able to use the VR viewer for a very limited number of games.  The visual effect is quite cool and it's definitely a neat gadget to have, and your kids will probably get a kick out of it too.  One game I found that was pretty cool (and free!) was VR X-Racer (available from the Google Play Store).  I found one or two others that were pretty good but unfortunately my phone would not properly support most of the available games and flyby apps.

Basically, the Star Wars VR Viewer is a cheap and cool gadget, but please do make sure first that your phone 1/ has a gyroscope so you can use it fully and 2/ is a size that's compatible.  Without being able to try many apps myself, I can only offer this very short review unfortunately. 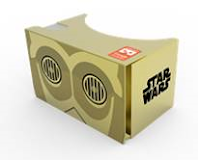 Suitable for both children and adults, the range includes designs of the popular classic characters C-3P0, Darth Vader and R2-D2, as well as the iconic Stormtrooper design, plus BB-8 from Star Wars: The Force Awakens.

The Star Wars™ VR Viewer lets users explore virtual reality worlds in 3D with a full 360-degree view, watch films and videos or play games. Compatible with almost any smartphone, it gives users access to thousands of apps in the Google Play Store and the Apple App Store, putting thousands of immersive 3D worlds right at your fingertips, all within seconds.

The optics are built using ultra-precise TRU-LENS technology. The lenses are slow injection moulded for superb image clarity, and then perfectly aligned using a finely tuned mechanical device, rather than by hand. This system ensures perfect alignment and avoids haze and double imaging common with many low cost Viewers.

With an RRP of £15, the Star Wars™ VR Viewer is great value and will offer a virtual reality experience that’s out of this world.

Fits most smartphones with screens up to 6 inches including iPhone 6 and 6+, Galaxy 7 and 7 edge. Suitable for ages 8 to adult. Responsible viewing time should be respected.