But it was a pleasure to see it presented at Adventure-X 2014, and to meet the game's creator, cyberpunk addict James Dearden (otherwise known as Technocrat).  The game features visuals by two of my all-time favourite AGS artists, Ben Chandler (backgrounds) and Ivan “Ilych” Ulyanov (portraits).  If you haven't played their games yet, check out by Featherweight by Ben and Patchwork by Ivan.

The game looks absolutely gorgeous and plenty of blue neon lighting is promised, as befits a cyberpunk game.  It promises to sound as good as it looks though, with a full music score and voice acting recorded at a studio rather than Dave Gilbert's bedroom - although saying this, James has devised a way to get extra voices in that don't require professional recording equipment too.

Originally James was planning on making 12 different small episodic freeware games, but eventually decided to make one large commercial adventure game (somewhat similar to my own experience with Troll Song and indeed Captain Disaster!).   We learnt a little more about the game world, the strange virtual reality environment "trance", and the characters in the game - all interesting stuff.
I didn't attend absolutely every demo at AX but certainly of the ones I did. Technobabylon was the best attended.  Will most definitely be keeping an eye on this one's development!! 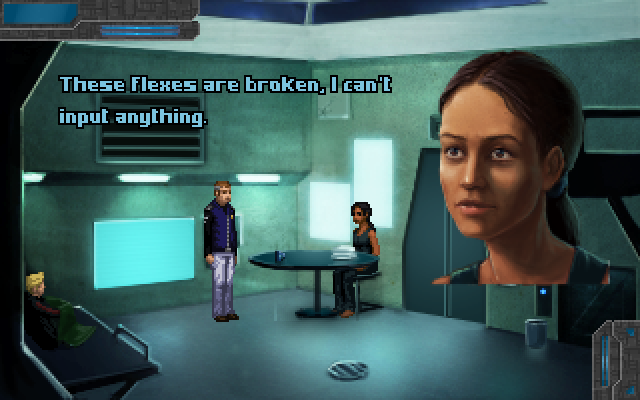