Cricket Captain 2014 gives you to take the role of Captain in one of the English county sides or an international team, with several options to choose from –test series, One Day International World Cup, and career modes for Internationals, English County Cricket., Australian State Cricket or Indian League Cricket.  You can play a selection of classic matches as well.
Though you do have choices to make off the field, it’s mainly your decisions on the pitch that will affect the result.  I must admit that I’m not the world’s greatest fan of cricket – though I like the keep up with the live text coverage on the BBC website when the internationals are on -  so I probably don’t have enough knowledge of or affinity for the game to really know quite how to master this game.  That said, I tried playing as Middlesex in the County Championship and won my first game, drawing the next 3.  In ODIs, I repeatedly lose as England… I even lost to Ireland!  You have to use a very different set of strategies in the one day matches, and clearly I’m not as good at those.  (Also, possibly a bug, I have lost the coin toss every single time I’ve played!)

Anyway, in-game, you choose your batters aggression, who should try to keep strike, etc.  You also need to take note of how “settled” the batter is – this slowly rises as the player faces more balls, but reduces again after breaks in play (rain can be a factor here of course).  When you’re bowling, you choose the bowlers, where to aim to pitch the ball (both line and length), and set the field (this is done on an aggression scale, you don’t have to manually set each fielder’s position).  Do you try to keep things tight or dangle the ball outside off-stump with plenty of fielders waiting?  Do you target the weaker batsman if you’re further down the field? 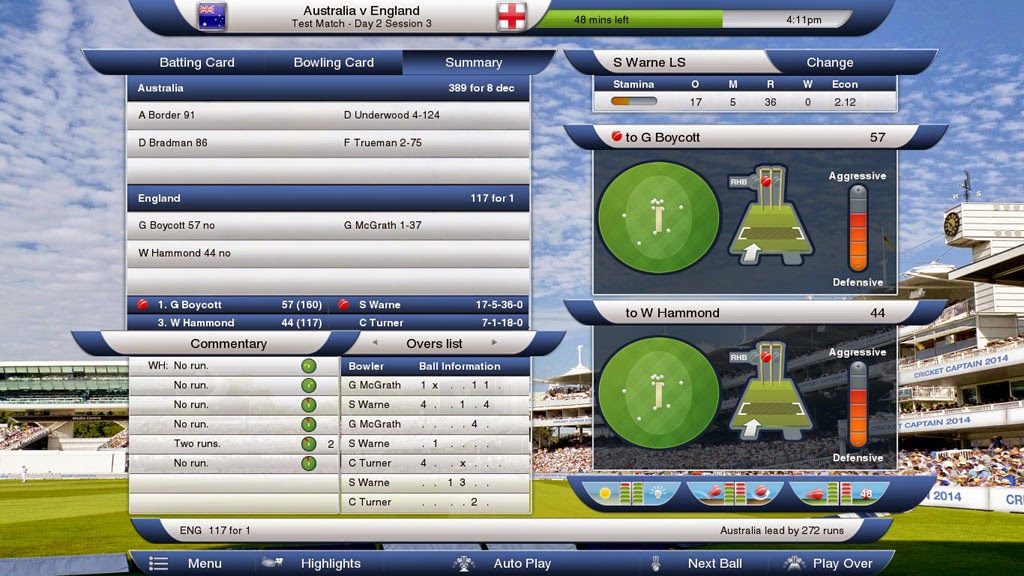 You can choose to watch the highlights in various ways – just the fall of wickets / chances / boundaries, the game progresses over by over whichever you choose, but clearly the more you choose to watch, the slower the game progresses.  Though the graphics are somewhat basic, the animations are nicely done – both bowling actions and batting strikes look realistic.    The commentary is nicely done although the sound samples are rather clipped.

The UI allows for a lot of tinkering for those that know their stuff, or for ones like myself who wouldn’t have a clue where Silly Mid Off is, it’s easy enough to get things how you want them without too much fiddling around.  There are also acres of stats to look at if you feel like it.

It’s a little obvious to say that Cricket Captain 2014 is a game “for the purist”, but that’s something you really have to say for the sport of cricket overall.  I would say that I only have a partial affinity to cricket but enjoyed this game quite a bit.  If you have absolutely no interest in cricket then this probably won’t win you over, but if you’re a fan of cricket, I think you’ll really get a lot out of this game.  Available for PC and Mac. 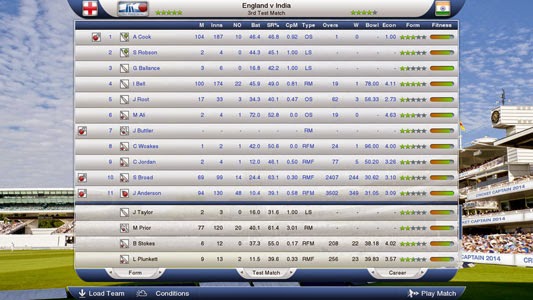