The Samaritan Paradox is the debut release of Faravid Interactive under the umbrella of Screen7.  It centres on a cryptologist, Ord Salamon (the player character) and a secret book written by a famous author as a series of clues to his inheritance, to his daughter Sara – whom Ord is employed to help.  The game is split into two areas – the real world, with Ord trying to track down first the book itself then following various trails of corruption related to the case – and the fantasy setting of the book itself.  I have to say that I much preferred the book parts, I felt much more drawn to the characters in there than in the real world and liked the puzzles more. As for the puzzles, they are quite varied and definitely aimed at the more experienced adventure gamer.  They are for the most part well implemented although for me the solutions or relevance of what you needed to do were sometimes not hinted at very well in the game (this may be just down to the fact that I am, despite being an adventure game fan for well over two decades and a developer for the last few years, not especially good at solving the harder puzzles!).  Ord himself is clickable, which I struggle to remember a single helpful use for but can think of a number of occasions where I found it annoying – quite frequently for some puzzles where he tends to stand right in front of a small hotspot that you need to click on, necessitating moving away so you can click on it.  I wouldn’t say any of the puzzles were unfair or illogical, but the difficulty level is quite high – especially during the several timed sequences in the game, some of which I found good, others a tad annoying.  The game always restarted at the relevant point straight away if you failed one of these though, so you never have a game over situation as such.

The plot unravels slowly and it seems that there is a fair amount of freedom in what order you can do things.  While this breaks up the linearity it does lead to the occasional problem (at least, I think this is what causes it), in that every so often Ord will come to a conclusion that completely blindsides the player.  I didn’t find it easy to be completely sure but it seemed that some puzzles had more than one possible solution.   The gameplay style is broken up by having 3 book chapters to play, with real-life stuff in between – this was definitely a good feature of the game.  As you would expect, many of the real-world puzzles involved breaking ciphers and the like.  These puzzles are generally well designed and interesting to solve. 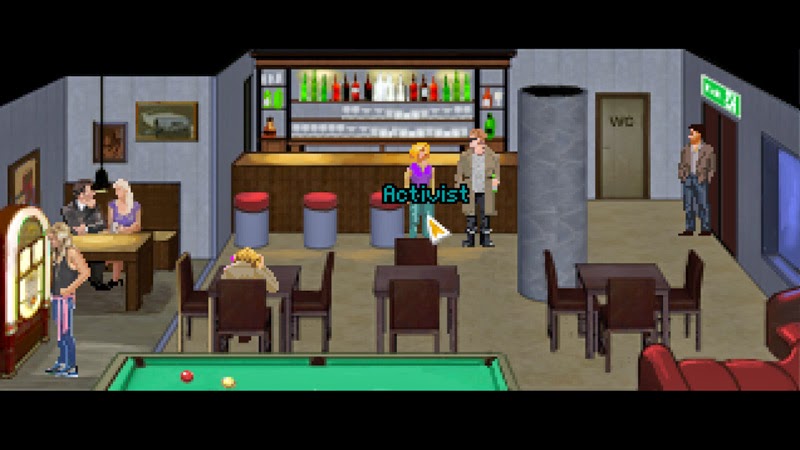 The graphics range between functional and good, and I liked the retro look achieved by using a limited colour palette.  I found the animation to be a bit on the simple side but it did the job.  The voice acting was a little variable in quality but overall added to the game, and ambient sound effects were very well used.   The music was quite varied and again, although I found it a little variable (not so much in quality, but one of the piano solos started getting me down a bit after hearing it for so long), overall it’s good and fits the game well.  As I usually do when there’s profanity in a game, I found it unnecessary and something that detracted from the game slightly rather than added to it.

The one big problem I had with TSP (I hope and more or less expect that this will have been fixed by the time you read this, since I have one of the very early review copies) is that there are a lot of missing interactions, especially in the book sections. The Samaritan Paradox is a solid adventure game and any veteran adventure game player will enjoy it, and especially its challenging nature.  I never felt really as involved with the characters or plot as I have with some other adventure games, and I have to admit that I wasn’t completely sold on the plot twist at the end (although it was quite clever), but that’s certainly not to say that it’s a bad game – I just wouldn’t personally rank it up with the best recent indie adventure games .  If you’re fairly new to the genre then I’d maybe play a few more easier games before you get to this one – if you are the sort of person who finds a lot of the more recent releases too easy, this is definitely a game that will appeal to you.

You can order The Samaritan Paradox, download the demo, and get more information from the Official Website. 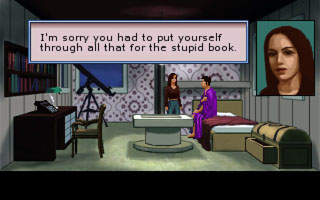