Moscow, Russian Federation - Independent developer, Azamat Bayzulaev today is pleased to announce the release of Defenderia - Curse of the Tinker King 1.0.1, a new adventure game for iPhone, iPad, and iPod touch devices. With colorful graphics and animations, Defenderia is a turn-based battle game that includes over 20 randomly-generated levels with infinite gameplay. Players must explore the level in search of the boss that protects the area and then defeat him in battle. There is also a special Arena to further challenge a player's tactical and strategy skills.


At the start of the game, players must select who will join them in battle. There is a choice of heroes, all with different skills and abilities that can be upgraded or enhanced. There are three kinds of hero classes: defender, aggressor, and engineer. The player chooses one of each class to create a mighty trio of heroes. 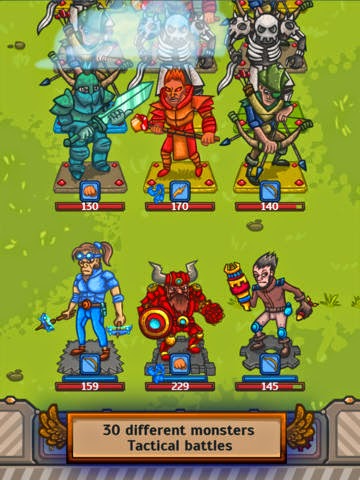 Defenderia features a variety of monsters that have to be defeated. Each monster stands on a different colored platform, which indicates whether the hero will receive health (green platform), energy (blue platform), or experience (yellow platform) after the battle. If the platform also displays diamonds, the monster is an elite monster and more difficult to defeat. A grey platform indicates that the monster is normal and does not provide any additional benefits once defeated.

All monster units have either a melee attack type or range attack type. The player must use strategy to determine which monster units to attack and in what order so their heroes remain alive. Players can use combo attacks to defeat more than one monster and earn rage points. If the hero is alive and not in chains, the player can also shuffle the mighty trio and change the targeted monster's platform color.

Additionally, each hero has a special skill which demands a certain amount of energy to expend in battle. If the hero has very little energy, the player can opt to engage with a simple attack. The simple attack is weaker but does not require energy to execute. Between fights, opening empty cells can restore a hero's health. After each battle, all heroes will gain experience and earn wealth. Defenderia provides a shop where the player can purchase various weapons, upgrades, and consumables for in-battle use. In the forge, a hero's equipment can also be improved. 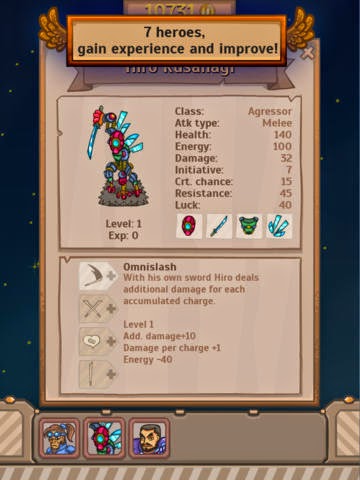 To complete a level in Defenderia, the boss must be defeated. But first, he must be tracked down within the map. Players explore each cell of the map to hunt down the boss. When selected, some cells will reward bonuses while others will offer choices, such as an opportunity to do battle or upgrade weapons. Once all cells are cleared, the player can receive a reward, such as additional coins. Each level is also awarded up to 3 stars. To acquire 3 stars, all 3 heroes must still be alive.

"Defenderia is an exciting, adventure battle game," says independent developer Azamat Bayzulaev. "With a mighty trio of heroes, you'll fight against hordes of monsters, defeat unique bosses, and find treasure! Battles are turn-based so the more initiative you have, the faster and farther you will go in defeating the boss and winning the game."

Pricing and Availability:
Defenderia - Curse of the Tinker King 1.0.1 is $1.99 (USD) and available worldwide through the App Store in the Games category. It is also available for PC, Mac, and Android on Google Play.