I’ve never played the previous BeatBlasters games, but this third game is an absolute blast.  As you might have guessed from the title, music and rhythm are important to this game – recharging your weapon, shield and jet boots is dependant on you keeping in beat.  Get it right often enough and you can earn a boost – for a few seconds you can use all 3 abilities without cost, and an added set of weapons and shields for that time to boot.

The music is good, dance style, and the way the music is implemented into the game is quite clever. The graphics are bright, colourful and cartoony, while the plot and characters are very off-beat.  All of this makes it a game that’s aimed nicely at a younger audience, but there’s certainly plenty for older players to enjoy too.  There’s a lot of humour in the game, it’s all pretty whacky.  You can play as a boy or a girl, I don’t think it makes any real difference to the game other than the actual character sprites. 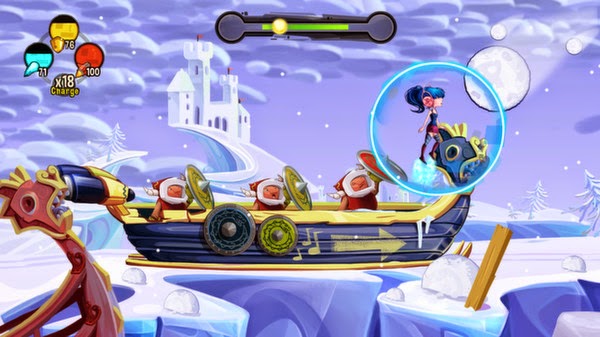 Though initially I had been going to describe BeatBlasters III as primarily a platformer, after playing for a while I felt that would be doing it an injustice.  There is certainly a platforming element, just as there are shooter and puzzle elements, but the game mixes things up so nicely that pigeon-holing it into a single genre would be unfair.  Some levels are pretty much out and out shooters, others are strongly puzzle-focused, and others are a mix of all three.  This keeps the game interesting as you rarely – if ever – have two similar levels in a row.

Whilst it would be best to play BB3 with a gamepad, the keyboard controls actually aren’t bad once you get used to them.  The game is divided into worlds, with each world being divided into stages.  Each stage typically takes around 2-5 minutes to complete, depending on how well you play it.  There are 3 difficulty levels – Easy, Normal and Insane.  Depending on how well you do in a stage (assuming you completed it), you are awarded 1, 2 or 3 stars – which then go towards a total, eventually allowing you to upgrade your weapon. 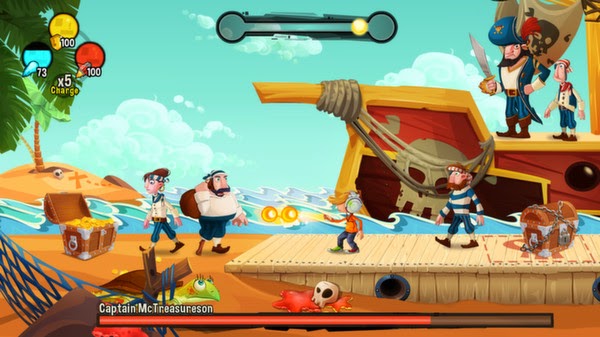 There’s really a lot to like about BeatBlasters III – it offers a very varied gaming experience with a good level of challenge, but never seems to be overwhelmingly difficult.  Definitely recommended.