100% Orange Juice is a computer "board game" featuring (apparently well-known) anime characters collecting stars and fighting chicken, their opponent players, and the random number god. The good thing is that you won't need to know about the characters in order to play the game. The bad thing is that you should really like chibi art and Japanese voice-overs in order to make it past the main menu screen.

To be honest, I had some trouble figuring things out first. The menu layout is clean and simple but the friendly "How to play" button doesn't open a tutorial, or an in-game manual, instead it brings up the Steam overlay and opens an online manual that is not exactly brief. So I opted for the good old "let's just try it out" approach.

Simply put, the game takes place on a board of coloured tiles. Each player has a "home tile" and basically just walks around the board in circles trying to reach a certain gaol (called quota). Once you reach that goal you need to stop by your home tile to claim a victory star. Win enough of those before someone else does, and you win the game.

This sounds almost too simple but the goals themselves are diverse- and after reaching a goal you're free to pick the next from a small list of options, so there's quite a bit of action going on. Collecting enough stars, defeating opponents, it's up to you. 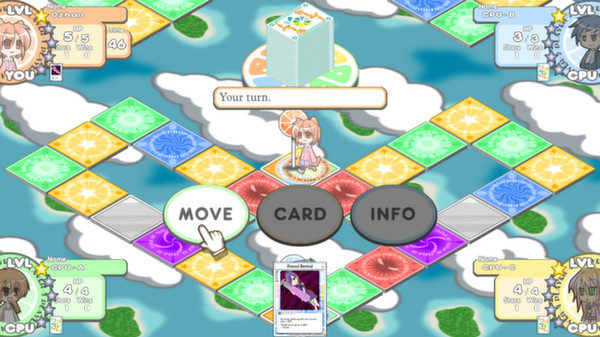 As any good board game sim should, 100% Orange Juice supports multiplayer but also allows you to play against the computer. This way or that, it's a game for 2 to 4 players. I played three matches against the computer in order to write this review and, to be honest, it was kind of fun.

You pick your cute little chibi avatar and then enter the board. Once it's your turn, you roll a die and move accordingly. The colour of your target tile then results in an "event"- a yellow tile lets you roll for bonus stars, a blue one forces you to drop stars. Red tiles hold tiny cute enemies you have to defeat, purple tiles teleport you, and so on. And if you land on a tile that is currently occupied by another player, you can fight them, too (stealing their stars). It's simple enough and pretty much everything is done by rolling dice. Combat damage, avoiding hits, amount of stars earned from a tile, all's done with a single click to toss that die. To spice things up you also have a deck of effect cards; after drawing one at random you can use it in fights and before movement to give yourself some advantage (roll two dice, heal, be protected from losing stars and much more).

In the end, all these many elements do a pretty good job of disguising how incredibly simple the core mechanic is. Once you things figured out and know what to do, it's actually quite relaxing to click through the turns, hoping to hit a yellow square so that you can use your bonus card and get those 30 stars you need to claim that last victory... and maybe fail. Because a CHICKEN defeated you. 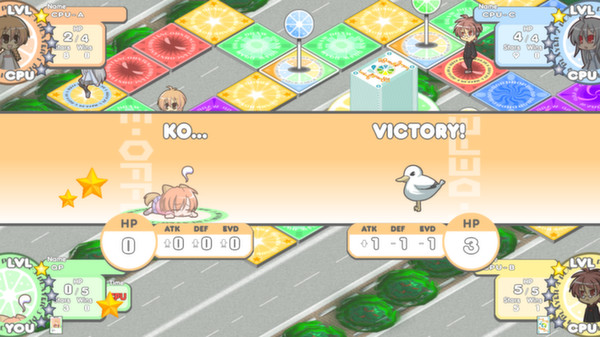 The whole game reminded me a bit of Mario Party, only that there are no minigames apart from the "fighting". Or it could pass as a more complicated version of Trouble! (the boardgame). With a few friends it's a nice way for a young player to pass a boring hour, and the game's overall cheerful childish anime look and easygoing soundtrack clearly targets young gamers. For those, the (many) different options (card! dice! character stats! CHICKEN!) will probably be a bit overwhelming but it's easy to just play and then realise how things work. And to that target audience I can recommend the game as a colourful, cheerful little time-waster.

But in the end 100% Orange Juice tries to be too much and fails to be really engaging in any of its parts. I thought the cards would be awesome, you can even purchase new cards with stars you earn during a match, but the effects are not powerful enough to feel satisfying. The fighting mechanic is neat, allowing you to nail your opponent to a tile until he recovers with a lucky die roll, but even that gets old fast. But this could, again, be just me. I mean, it's not Civilization 4 or BatlleChess and doesn't try to be those games.

It's just a fun little boardgame. And that's not a bad thing.

Review by Ghost from the AGS Forum 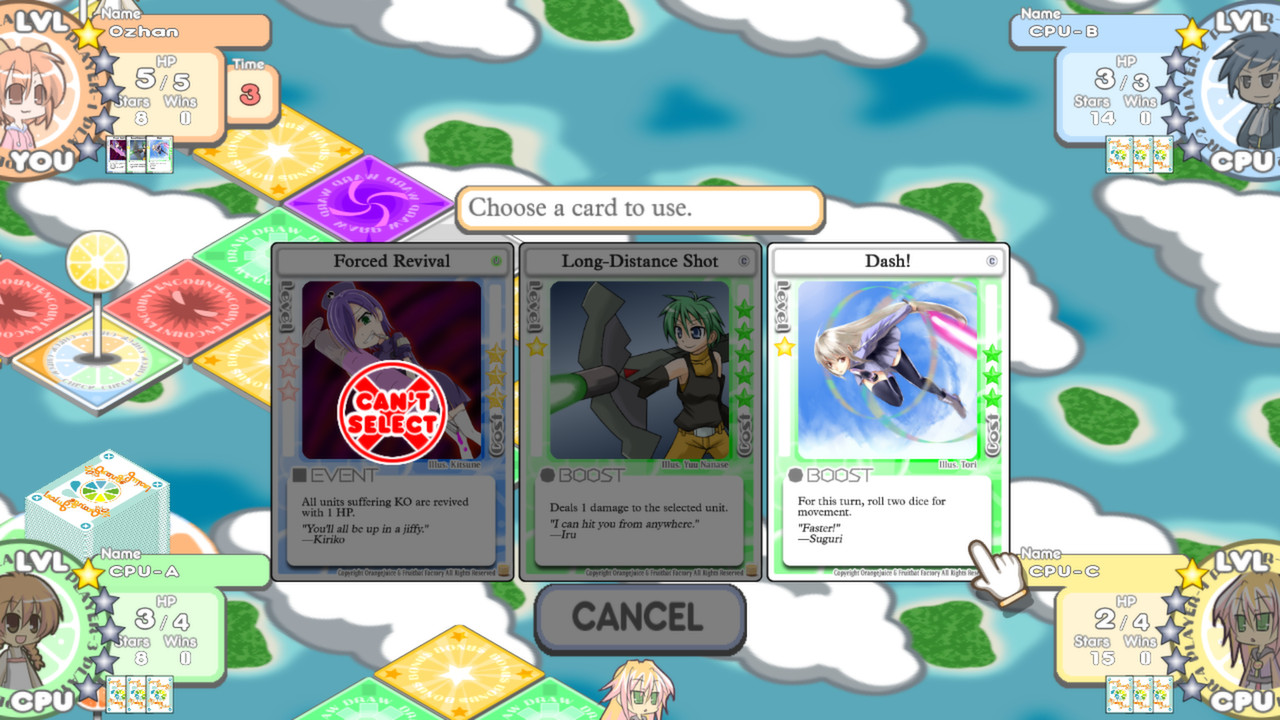