1/ So, three brothers making computer games… you’re the equivalent of pop band Hanson for our industry!

Wow, it’s the first time we have been compared to “Hanson”! :D

The three of us grew up playing video games together, mainly point and click adventure games. We had always felt like creating our own graphic adventures but, for one reason or another, it never seemed the right time. But when Alberto, our writer, told us about the “Dead Synchronicity” plot… we felt the time was now! 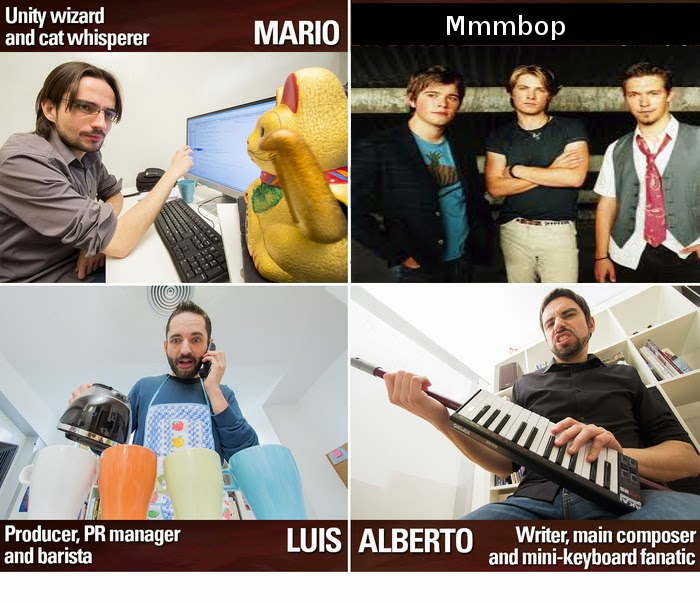 2/ Tell us a little about “Dead Synchronicity” – what’s it all about?

“Dead Synchronicity: Tomorrow comes Today” is the first installment of the “Dead Synchronicity” series. The whole saga will tell the story of Michael, a man who wakes up, after some kind of a coma, to a world that is not like the one he remembered. “The Great Wave”, a chain of natural disasters, has plunged the world into chaos. Besides, the “dissolved” pandemic, although it gives sick people strange cognitive powers… finally kills them, dissolving them into a pool of blood.

So, in this merry scenario, Michael has to recover his identity (he suffers from a strange amnesia) and try to find the origin of “the Great Wave” and the solution for the “dissolved” pandemic, as both seem to be connected. If he doesn’t hurry, he won’t be able to avoid the impending moment of “dead synchronicity”, when Time itself dissolves…


3/ Where did the original idea for Dead Synchronicity come from?

We all are very keen on sci-fi movies, books, and video games. Besides, we love the soft-gore terror movies from the 70’s and 80’s, specially the Italian giallo. We also love dark, twisted creations, like the works of Terry Gilliam, Joseph Conrad or Andréi Tarkovski. So, I guess if you merge all those influences together… you get something like “Dead Synchronicity”.

Alberto, the writer at Fictiorama, started writing a short story about the dystopian realm of “Dead Synchronicity”. I must say that turning the short story into a point and click game has been really exciting!


4/ Are you using an adventure-game specific game creation tool, or have you created your own for the development of this game?

We tried several adventure-game specific engines (AGS, Wintermute, Visionaire…). All of them have their pros and cons, but we wanted to implement some features, like the continuum close-up in the dialogues, that required a more “open” engine.

So in the end we decided to go with Unity, which is quite a bit more complex than an adventure-game specific tool, but it also gives developers more freedom.


5/ What have been the biggest challenges in terms of game development?

It was probably handling the graphics. To create the effect of close-up zoom, we need to manage quite big bitmaps - so Mario, our programmer, has learned every trick in the book to reduce the amount of memory the images occupy.


6/ What’s been the most rewarding aspect of making the game?

Without a doubt it’s been the feedback of players. We’re running a Kickstarter campaign right now (help us funding “Dead Synchronicity: Tomorrow comes Today”, we need your help! http://www.kickstarter.com/projects/fictiorama/dead-synchronicity-tct-a-dark-point-and-click-adve), and we have released an alpha demo.

So it’s the first time players can experience our game for real, and reading their remarks on both Kickstarter and Steam Greenlight (vote for us here: http://steamcommunity.com/sharedfiles/filedetails/?id=237554924 ) is awesome.

In fact, our game features a mature plot, a tough art style, a moody soundtrack… and our main goal is to move players. To know we are doing it… is the best thing that could happen to us.

7/ When are we likely to see the finished product?
Our goal is to release both PC and Mac versions of our game in 2014, and the iOS version a bit later, in 2015.


8/ What are your own personal favourite adventure games and / or biggest influences on the way you’ve approached designing Dead Synchronicity?

We love classic point and click adventure games such as “Day of the Tentacle” and “Monkey Island”. In fact, our goal with “Dead Synchroncity: Tomorrow comes Today” is to recover, to some extent, the “open-world” experience of free roaming that these adventures featured.

On the other hand, regarding plot, we wanted to make a game along the line of titles like “I have no mouth and I must scream” or, more recently, “The Cat Lady”: dark, mature, even gruesome.

Besides these games (probably our biggest influences) we love the adventures that companies like Daedalic and Wadjet Eye Games are making or publishing. And, of course, the adventures made by our Spanish friends Pendulo Studios, great games made by great people!

9/ If you had one piece of advice to give new indie game devs, what would it be?

I would tell them to fight as hard as they can to fulfill their dreams… but always with their feet on the ground! Making video games is fun, but also really hard, and takes a huge amount of painstaking work. But when you see players having a good time with it… then you feel it was worth all the sleepless nights!


Thanks guys for the interview - Luis, Mario, Alberto and not to forget Martin (he's not their brother).