Cheeky Sprite Studios are currently busy developing an adventure game called "The Secret Cove".  I interviewed Nigel Mosley, one of their developers, about the game...


1/    So you’re currently developing a game called “The Secret Cove”.  What’s the game about?
The Secret Cove is a unique smugglers themed point & click adventure game with game scenes inspired by / based upon the stunning scenery of Cornwall in the UK.
Your quest is to find pages from the journal of a deceased notorious smuggler from years gone by, leading you to his lost treasure where you will find your fortune.
You must find' The Secret Cove', hidden deep within the lost smugglers tunnels beneath the beautiful scenery & locations of  Cornwall (UK).
You will immerse yourself into a unique world of stunning scenery & hidden locations.  To progress your journey you will need to solve puzzles, find artefacts and create tools to help you on your way.
You will discover many different locations both above & below ground including  harbours, Cornish streets, beaches, cliffs and coves, countryside, buildings.
The Secret Cove will feature a number of Cornwall tourist locations including scenes from Padstow, St Ives, Port Issac, The Eden Project, Minack Theatre, St Michaels Mount, Boscastle withcraft museum and many more. 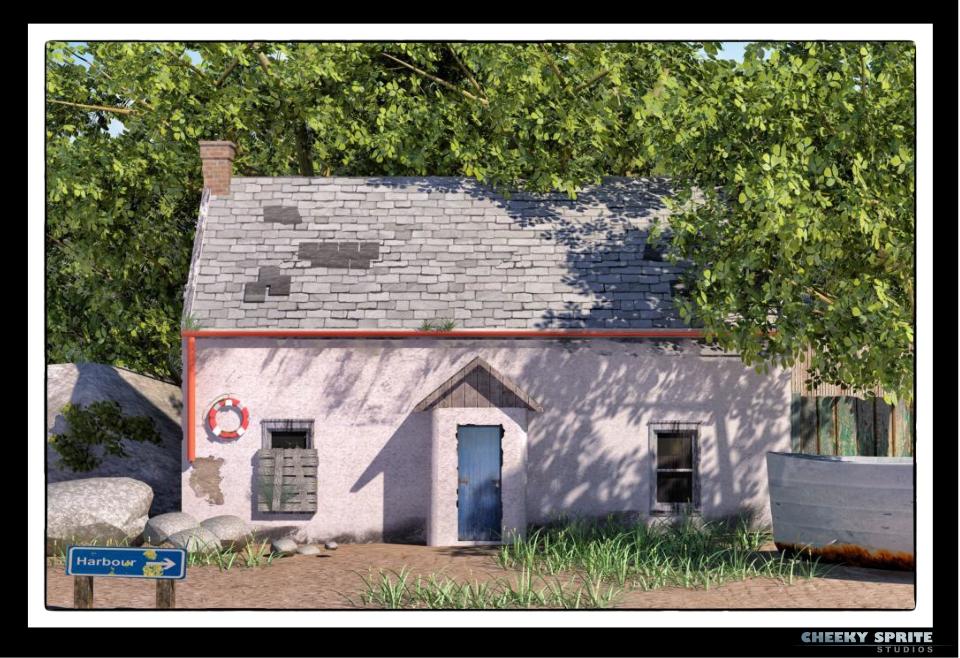 2/        Any particular reason you made a game set in Cornwall?  I’m wondering which came first – the game idea, or the game location!
Cornwall is such a beautiful part of the UK.  Its scenery ranging from dramatic cliffs and beautiful beaches and coves, breathtaking countryside and quaint fishing villages, harbours and streets.
Its a place that we have been to many times for holidays over the years.  We said jokingly that it would be great if we could do a Cornwall based game and create an opportunity to do a  mini tour of Cornwall to find new locations, textures etc.  And it really started from there.  Eventually this turned into a serious idea, and we started to discuss which genre of game would be the best to incorporate the intrigue and the Cornish history of smuggling and coves, while showcasing the Cornish landscapes. 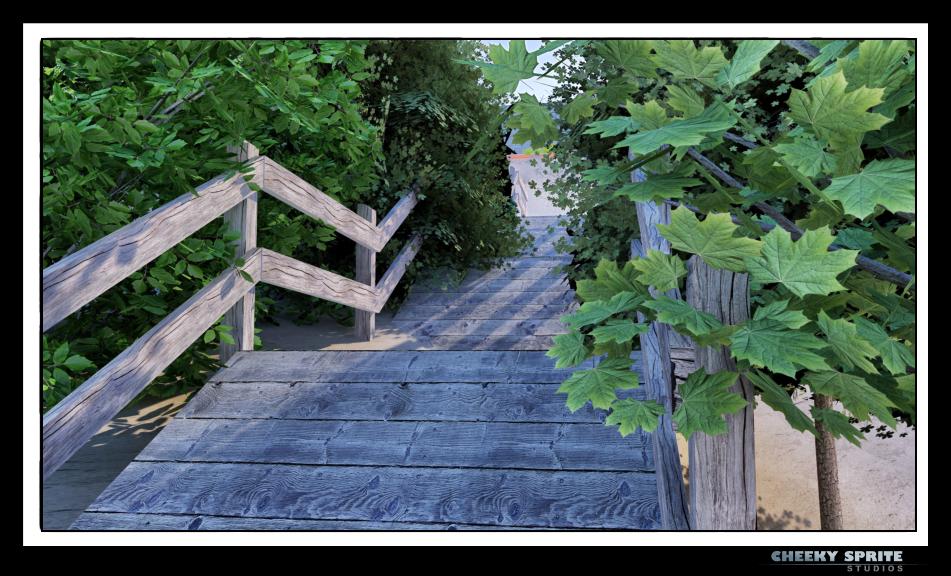 3/        What type of game is The Secret Cove going to be?
You play The Secret Cove from a first person  perspective (although not an FPS), selected to enhance the immersive experience we are striving for.
You will travel around a non linear world, solving story relevant puzzles, finding numerous artefacts and creating tools that you will need to use along the way to aid you in your quest.
The in game scenes will be 3D rendered with scrollable areas.  There will be an abundance of particles, effects and Ai objects (such as crabs, seagulls, fish etc...) and sound effects
We wanted to make a game that is not only challenging, has great game play and is good fun but also offers an immersive experience.  We strive to make an in game world that is interesting, interactive and that looks beautiful.  Somewhere you can be active in the gameplay but also relax and enjoy the scenery around you.
We wanted to keep the game casual so that you can pick it up and play at anytime.  By giving the game a modern style of graphics, using particles, a.I. Sprites, physics puzzles etc. To try to ensure an immersive experience.   Our idea is to produce scenes that allow you to just sit back and relax whilst taking in the sights and the sounds of Cornwall without even having to play the game. 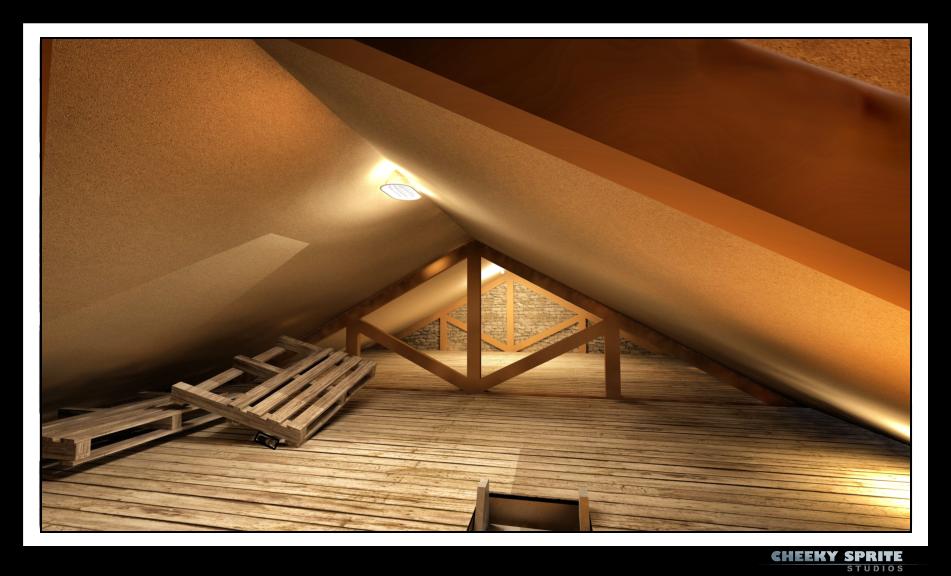 4/        How’s development been going so far?
Its moving along nicely, but it's a big...well actually huge project for us. We have almost finished the main coding on our adventure game engine, and developed an editor in order to help us create the individual screen scripts, so the coding part is about 90% complete.  The biggest hurdle at the moment is creating the models for the scenes as there are many scenes and these need to be as accurate and details as possible in order to keep it true to the scenery of Cornwall (with a little bit of poetic license).  We have also completed the storyline and plot, completed the design of most of the puzzles and designed the intricate game map. 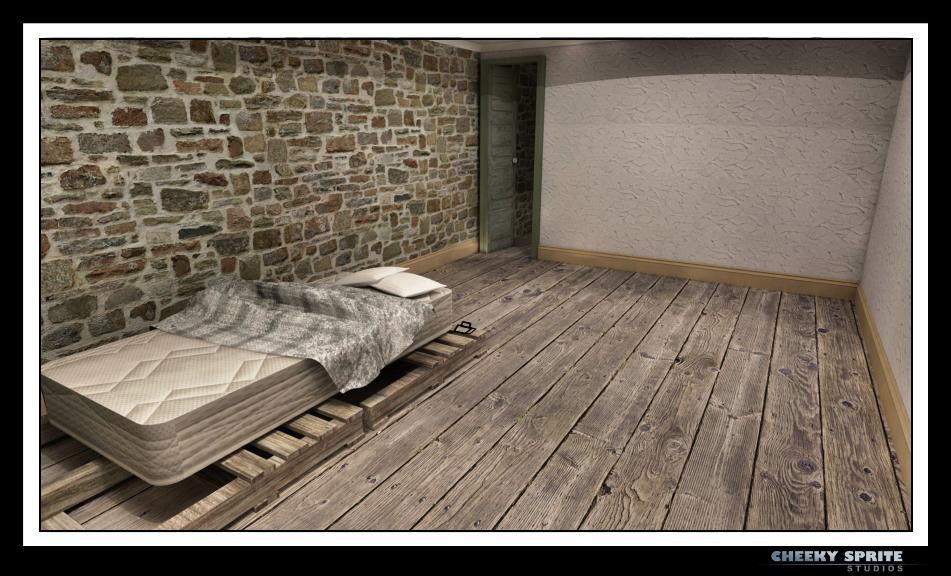 5/        What game engine are you using (and why did you decide on that one)?
Originally we looked at Marmalade because of its cross platform capabilities and then somebody mentioned taking a look at a framework called the Monkey-x SDK as we could use opengl natively if needed and its an open source framework.  It turned out that Monkey was far cheaper than Marmalade(which is good for a small Indie team on a tight budget), but also covers more platforms currently.
I have to be honest I was a little dubious at first, but after experimenting with it we decided that this could be a workable option for us.  There are a few things that need to be coded as they aren't supported by default, but  it is easy to include anything that the framework doesn’t support by either adding it in natively or writing a module to include.  Monkey-x SDK actually translates to each native language e.g. C++, C#, Java etc. So it is fast and saves a lot of time porting to the different platforms and the source can then be tweaked in Visual Studio etc. 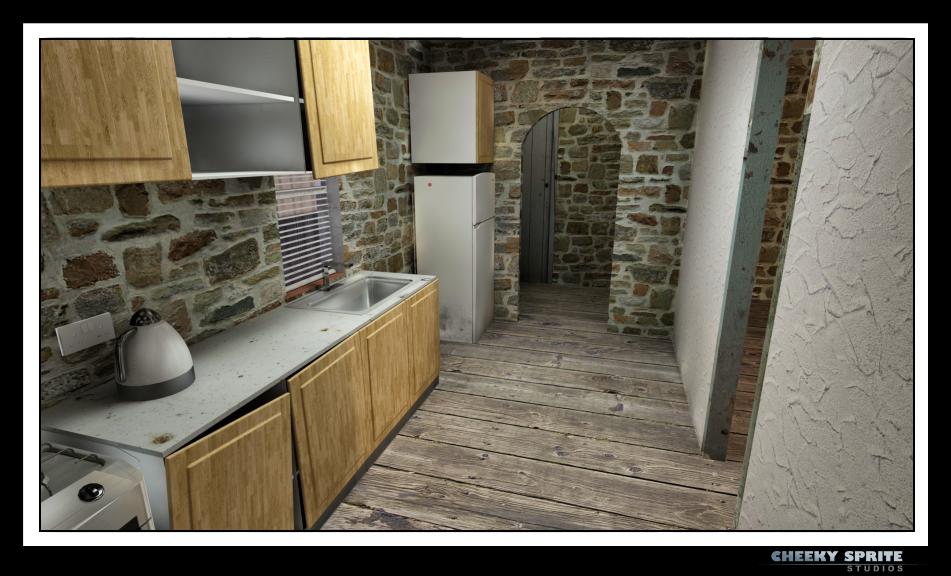 6/        Cheeky Sprite Studios… okay, I’ll bite.  Why that name?
Originally our plan was not to take on any client work, so we were looking for a pure game related name, whilst keeping it funny and friendly.  So “Sprite” came from the well known c64 graphics sprites and “cheeky” as we have a good sense of humour (which you definitely need in this line of work).

7/        What’s been the biggest challenge in terms of developing The Secret Cove?
There have been big challenges in different areas of the project. Suzi (@Lunarose13) who is managing the whole project has had a massive challenge on her hands in pulling together a plan that ties in every aspect of the development, including timescales, resource, licenses, marketing and especially budget.  As we have taken on very little client work since this project began (due to time constraints) she has had to closely monitor every aspect of the project.
Development wise, the biggest challenge that I have found is modelling the scenes as I was originally a mainstream programmer and not a gfx artist, so that has been a huge learning curve, and also the sheer amount of work and very long hours, although I can't complain about the hours as this is something that all Indie Devs. have to deal with.  Its part of the fun! 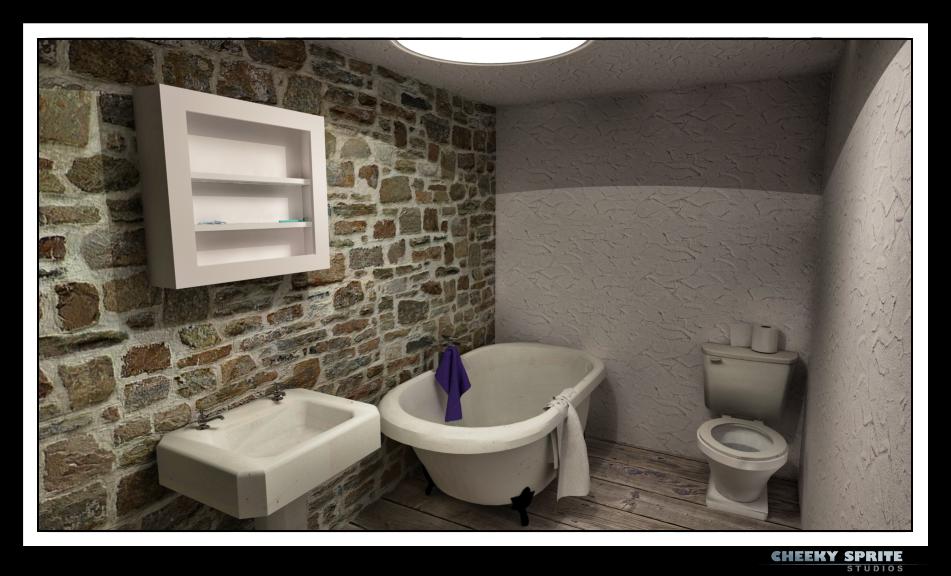 8/        What aspect of the game are you most proud of?
For me personally its the scenes.  Once I can see the scenes running within the game with the particles and fx, I can look at them and feel as though I have done the best that I can with them.  Just hope people will like them.
I am also really proud of the storyline that Suzi has pulled together.  It was a massive undertaking to research and source the different scene locations and then create a storyline and game map from them to include story relevant puzzles and a game that flows, yet is not linear.  I think she has done a really good job and it is not a task that I would have liked to have undertaken on my own. 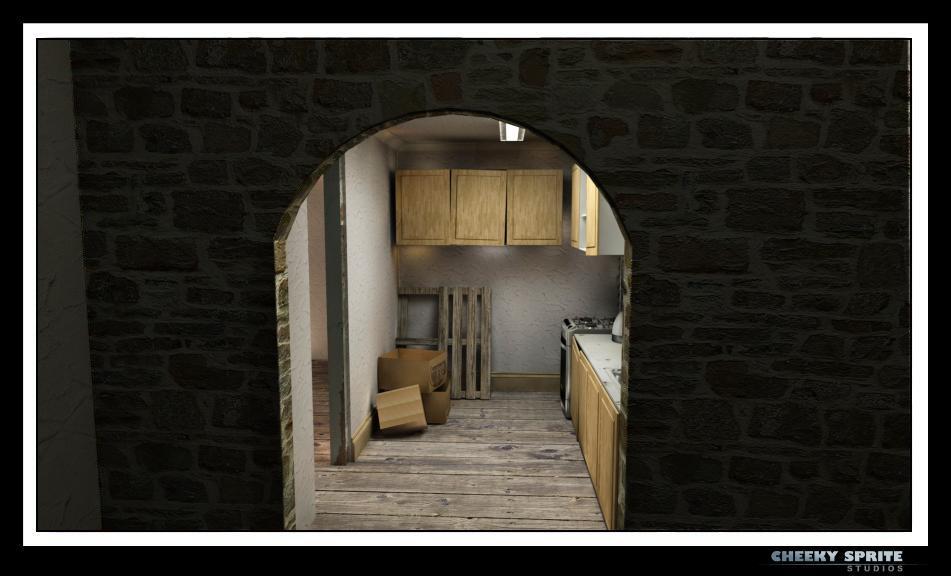 9/        Is this likely to be the first in a series of games, or a one-off?
This all depends really on the success of the game.  We would love to create another, as it is by far the most fun project that we have ever worked on (and the hardest), but due to the nature of adventure games, they are not something that you can produce in 3 months, so if this isn't successful, not only will we not be producing another anytime soon, we may be going back to part time indies :)

10/      Do you have a release date (or tentative release date) for The Secret Cove yet?
We originally had a target of the end of May / early June, however, as we have added in more scenes and features as we have gone along this target maybe increased by a month or so.  We do need to finish this as soon as possible, but we don't want to rush the ending as this will ruin the whole game. 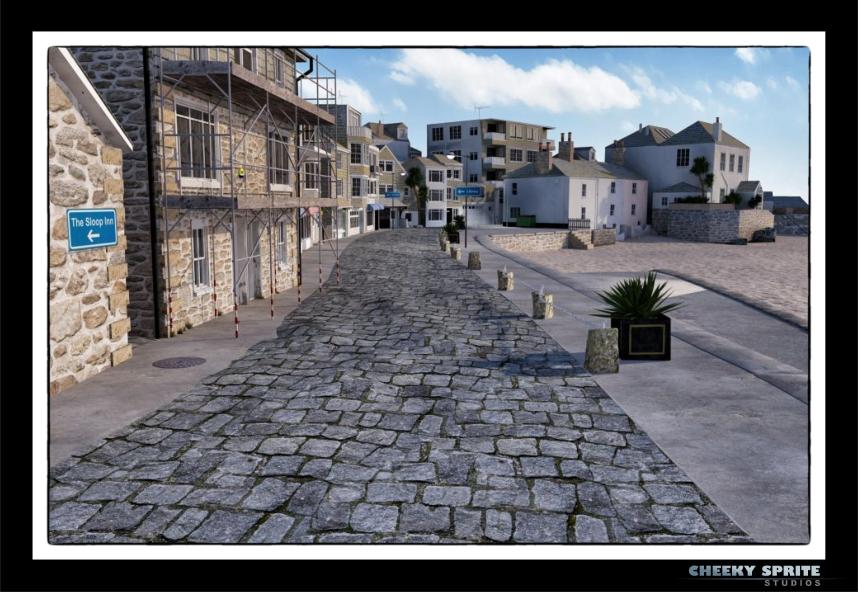 11/       Are there any particular inspirations drawn from other games / developers that have influenced your own design decisions?
We have tried not to have our design influenced by other games, although it is difficult as there are so many amazing games out there.  We have tried to come up with some original ideas (especially) on the puzzle side of things, although we have had to introduce a hints system, which is a common theme in most adventure games, as otherwise some of the puzzles could potentially be harder for some people than others, and we don't want that to ruin anyone's game play experience.

12/      What do you think of the current indie game scene and how things are likely to develop?  Is there an “indie bubble” at the moment?
Its a tough one to know the answer too.  I think there is definitely an Indie bubble there at the moment, which is fantastic as it has once again (like the retro days) introduced a platform for many talented individuals to produce some innovative and amazing projects from anywhere and to any budget.  It gives anyone the opportunity to make something of themselves in the gaming world.
I think that the indie scene will probably manage itself in terms of size, as although it is growing at a rapid pace, I am sure there will soon become a decline to balance it out, as people or teams either can't afford to do it anymore, or lose interest and decide its not for them etc.  but at the moment it is a very exciting place to be.
13/      What advice would you give to aspiring indie game devs?
Prepare yourself for a lot of hard work but at the same time you will get a lot of satisfaction.
You will definitely need a thick skin, as trying to explain to friends and family that you are either spending many hours working on a game, or developing a game full time for a living is not the easiest of tasks, and it is difficult for people who don't share the same enthusiasm to grasp that your idea has any potential.  You have to believe in what you are doing, as if you don't, the negativity will eventually cause you to doubt yourself.  However,  try to remain humble, and be prepared to take advice and constructive criticism from knowledgeable people,  as there is a lot of good advice and opinions out there that can really help you.


My biggest advice is use the tool that is most appropriate for you, or the project that you are doing.   For example, you can develop a bubble popper puzzle using C++ and the unreal engine, but why use a tool that is far too overpowered for the job at hand when you could use one of the many other SDK's that will perform the task just as well but in a fraction of the time.   If your next project needs C++ and Unreal then great, but if it doesn't then don't feel ashamed to use a tool that is quicker, at the end of the day it is about getting a great quality game out there as quick as you can do it.  If your game is good and it performs well, the end user will not worry about which SDK or tool you used, they will just love playing your game :) 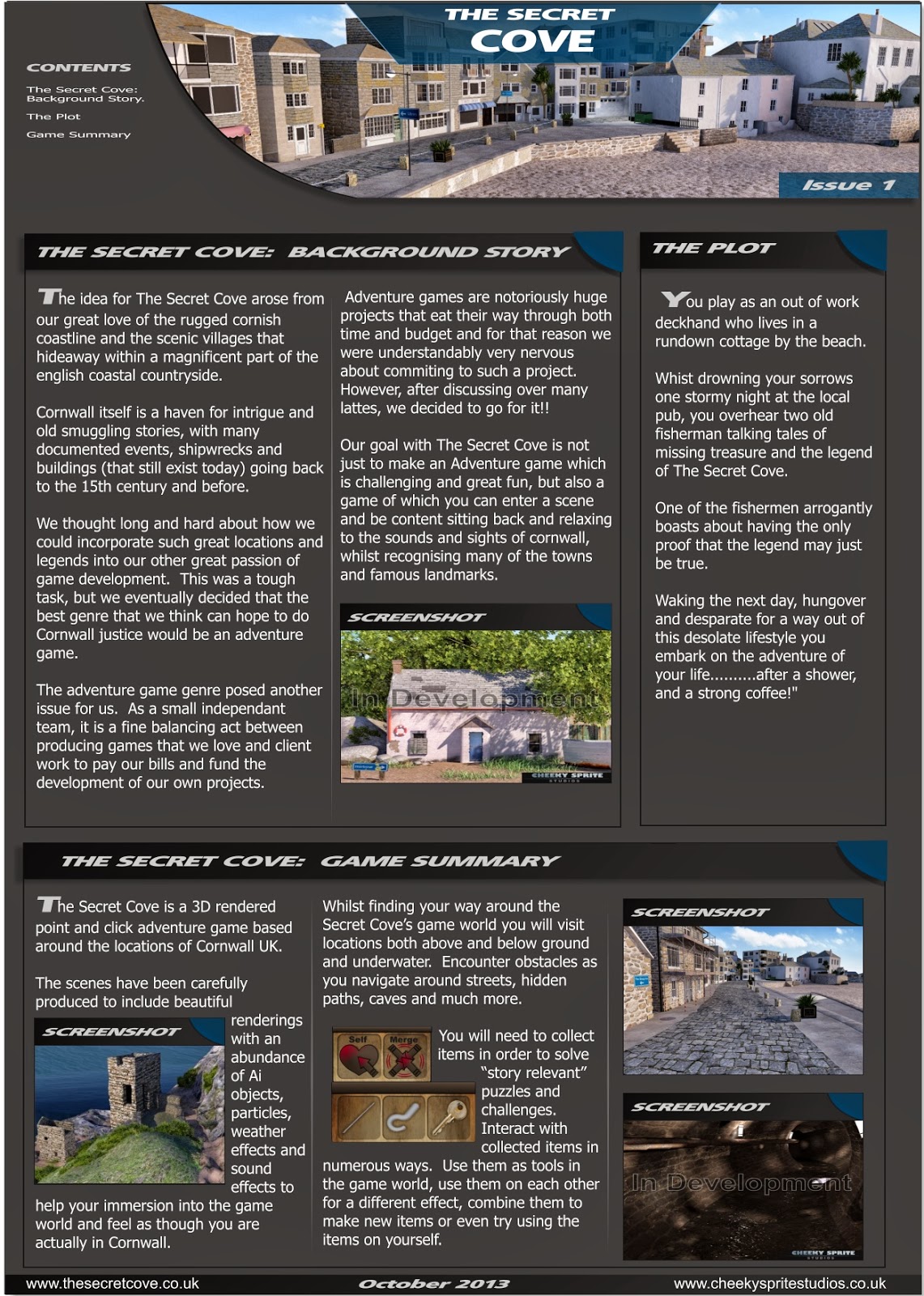