It was 2006 when Dave Gilbert tried the "now-or-never" approach to commercial game development and first released The Shivah, an adventure game originally developed in one month for the monthly Adventure Game Studio (MAGS) competition of that same year.  Wadjet Eye Games exists as we know it today largely thanks to The Shivah. 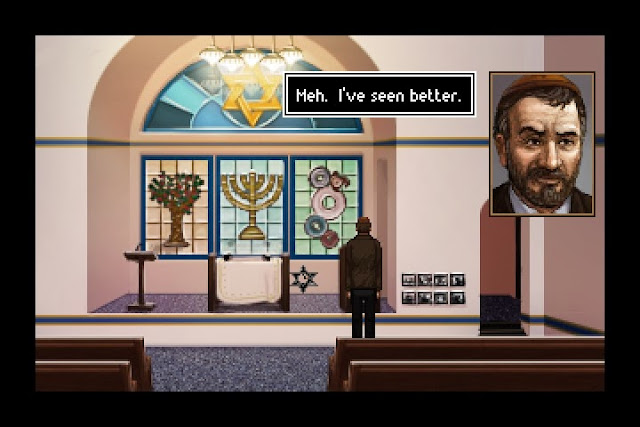 Even today, The Shivah is one of the few games to feature a rabbi as a main character, in this case rabbi Russell Stone.

Deeply in debt and with his synagogue overwhelmed by bills, Rabbi Stone is visited by the police: a former member of his congregation, which he didn't talk to in the last eight years, died three days earlier and left him a huge amount of money in his will. How can that possibly be? Moreover, why are the police involved? Rabbi Stone seems sceptical and the circumstances are not helping. This is a tale of crime and mystery, that most of the time will make us choose between "what a rabbi should do" and "what a man should do". Sometimes you may need to out-rabbi someone in a fight, sometimes you may need to punch him in the right spot. 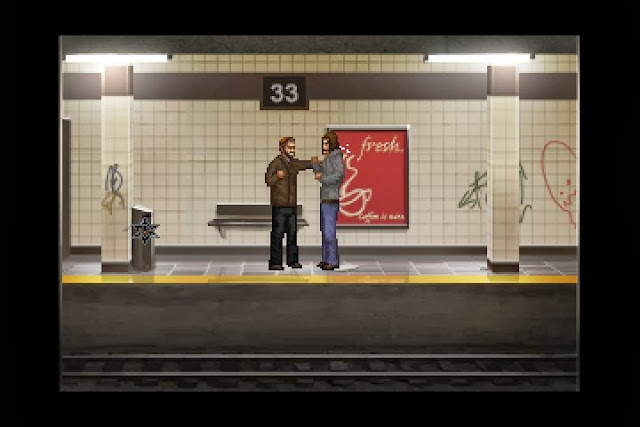 I'm not new to "Jewish humour". I was introduced to it by the works of Moni Ovadia, a Jewish Italian-Bulgarian actor who in 1998 collected dozens of jokes about Jewish people and religion, actually spreading a lot of knowledge about the roots of their culture. So, finding that the game was filled with the same kind of jokes was really engaging. These are displayed in a typical Dave Gilbert style: when engaged in a conversation, you may choose to answer questions in a "Rabbinical way", meaning that you will answer with another question; when logging into your email account, you may browse through different Jewish related jokes; you always carry a little helpful Yiddish dictionary, and so on.

So, The Shivah: Kosher Edition is actually a remake of Dave Gilbert’s first ever commercial game. It's still quite short (adventure game veterans may finish this up in about a couple of hours) and sometimes you may feel in a bit of a "rush", but it’s still nothing short of great, especially if you bear in mind that it was a debut game (albeit a remade debut game).  Polished thanks to the programming skills of Janet Gilbert and the painting capabilities of Ben Chandler (Ben304) to be ready for iOS, the game is also fully voice acted, which sometimes is not perfect (also due, maybe, to some minor recording issues) but indeed excels, in my humble opinion, when Joe Rodriguez (also the voice of the Director in Gemini Rue) performs as Rabbi Zelig. 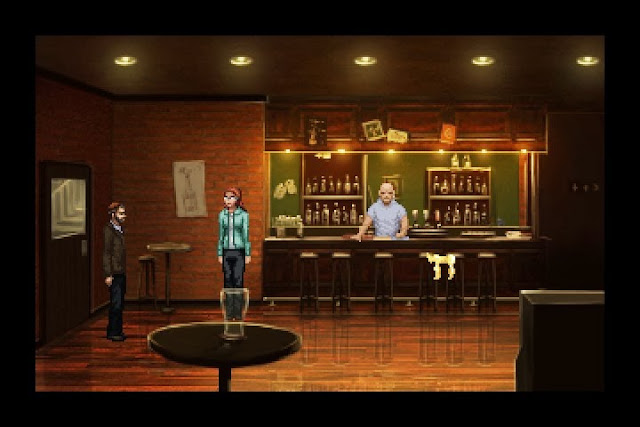 One of the things I loved most is that every question I had about the development (for instance about the length of some scenes or the voice acting direction) was covered by the DVD-style commentary included in the game ("Kibbitz mode"). Dave and Janet are both funny and very precise in explaining what they would and would not include in the game, if they were going to make it today, handing out also some design tips here and there, which is always a plus.

What else is there to say? Go buy The Shivah: Kosher Edition and give it a try!  You can find more information about the game, download the demo or buy the game on the Wadjet Eye Games website.  (At time of posting the price is $4.99.)