How do you like your retro RPGs - retro or RETRO?  If it's the latter, you're going to love Nethergate: Resurrection, a very old Spiderweb Software game that's recently been given the Steam re-release treatment. 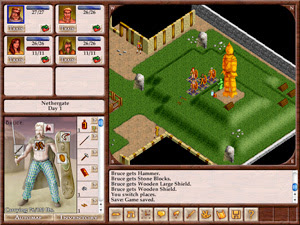 Nethergate features a bit of a non-standard plot - you're not tasked with saving the world from an ancient curse or whatnot this time - instead you play as a Celt in Roman-occupied Britain - or indeed as a Roman!  The two sides constitute virtually two completely different games, albeit set in the same game world at the same time.  It features most of the elements that you'd expect if you've played a Spiderweb Software RPG before but with less detailed graphics and (this was where I had a problem) a clunkier interface.  I suppose I've been a bit spoiled by the very user-friendly interface in their later games such as Avadon: The Black Fortress - but for me, I had to eventually admit that Nethergate was a little too retro for my tastes.  I never really played RPGs when I was a kid, maybe that's affected things - if you're someone who grew up ploughing through Ultima, I think you may have a very different view of things.

There's a good game in here definitely, but if you're not willing to use what felt to me like a rather cumbersome interface, you may never find it.