You Can Count on Fun for Everyone with GoSum on iOS 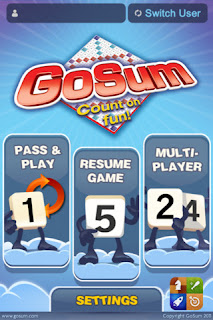 Nassau, Bahamas - Are you ready for some number-crunching fun? Aaptek Ltd. is thrilled to announce the immediate release of GoSum(TM) on iOS, an adventure in numbers that everyone can enjoy. Absolutely addictive and undeniably educational, this mobile mindboggler pits players' numerical skills against their friends, with gameplay similar to popular word games such as Words With Friends(TM) and Scrabble(TM). However, GoSum allows players to enjoy 2, 3, or even 4-player games against anyone in the world without troublesome language barriers.


GoSum lets players engage in fun and casual competition against their family, friends, or a randomly chosen opponent, while providing an enticing challenge that tests the imagination and creativity of users from all skill levels. Using tiles for addition, subtraction, multiplication, and division, as well as numbers, players take turns building off of each other's equations in the style of a crossword puzzle. Additional points can be gained by strategically using tiles to score double and triple number and sum squares. GoSum is an instant classic, providing an entertaining and interactive fusion of fun, wit, and learning for all ages. 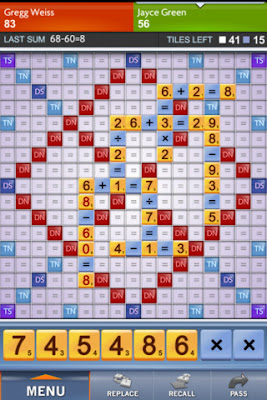 "GoSum was initially developed as a way to teach children about numbers, but quickly moved on to be an addictive and exciting game," states Colin Thompson, Founder of Aaptek Ltd. "We spent years honing in on a fun yet educational game that could translate the joy of numbers while appealing to an audience of all skill levels. GoSum is truly a project of love that is guaranteed to enchant players regardless of language or experience and we hope that users enjoy playing the game as much as we loved creating it."

GoSum was first developed as a board game around 1990 to help teach arithmetic to the two children of Colin Thompson, Founder of Aaptek Ltd. Over this period, various board styles were developed to introduce an element of fun and competition. After completing the board game in 2010, it was decided to design and introduce GoSum as an app. Two years later, and 27,000 lines of programming, the game is now an app that is both enjoyable and addictive to play. They had fun making it, now you have fun playing it!

GoSum Features:
* Take advantage of "bonus" squares to strategically increase scores
* Play 2, 3 or 4-player games that'll keep you on the edge of your seat
* Show off your high score and compare it to others by viewing the leaderboards
* Login using your Facebook account to show your friends who's top-dog

Pricing and Availability:
GoSum 1.5.5 is only $0.99 USD (or equivalent amount in other currencies) and available worldwide exclusively through the App Store in the Games category. GoSum HD for the iPad is $2.99. Players can also play the free versions of the app with GoSum Free and GoSum HD Free, available on the iTunes App Store.

Aaptek Ltd. is an independent iOS, Android and Windows game development & marketing company which produces educational titles for the mobile market. Operating globally for over 3 years, their core team consists of talented and creative individuals who are highly experienced in the game making and the game manufacturing industry.