Frozen Synapse - a structure contained at sub-zero temperatures that permits a neuron to pass an electrical or chemical signal to another cell, or 2011’s critically acclaimed, multi award winning game brought to you by Mode7 to the sheer delight of the gaming world? You decide!  Awards include - Best New IP @ Develop awards 2012, PC Gamer – Strategy of The Year, Independent Games Festival Audience Award, Indiegames.com Strategy Game of the Year 2011; And, in our opinion the most prestigious of all – RockPaperShotgun’s Best Glowy Lines Award! 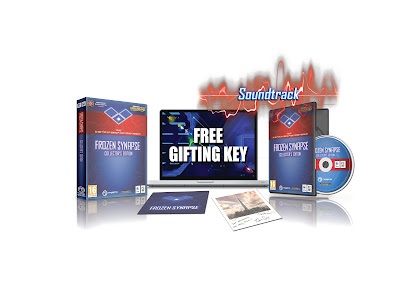 Merge Games are delighted to announce a Collector’s Edition PC/Mac version of Frozen Synapse for retail in the UK – included in the (fancy blue) box are – a Sticker, Postcard (both in the cyberpunk style we now know and love), Soundtrack, Extra Steam gifting key and the RED Expansion pack making this Collector’s Edition a must have for Frozen Synapse fans old and new.
To celebrate the September 7th 2012 release of Frozen Synapse: Collector’s Edition, Merge Games are giving away a free copy – please go to their Facebook page for more information. Pre-order at http://www.mergegames.com/store/
Game Info:
Frozen Synapse is the ultimate tactical game on PC and Mac.
It brings the simultaneous turn-based strategy genre bang up-to-date and lets you give detailed, accurate orders to your squad: classic game play with a modern interface. Plan your moves, test them out, then hit the "Prime" button: both you and your enemy's turns are executed simultaneously. Competitive-but-intuitive multiplayer and a huge single player campaign mean that Frozen Synapse will give you hours and hours of tactical delight.
Key features:
§  Get a FREE full copy of the game, including the Red add-on DLC, for a friend with every purchase
§  5 challenging multiplayer modes, including the innovative bidding-based “Secure” and “Hostage Rescue”
§  55-mission single player campaign with dynamic dialogue and thrilling near-future narrative
§  Powerful Skirmish Generator
§  Facebook, Twitter and YouTube integration
§  15 Steam Achievements
§  Integrated IRC chat as well as various community features
§  Random generation combined with hand-crafted content means that levels and maps are different every time
§  Critically-acclaimed electronica soundtrack by musician nervous_testpilot

RED DLC Info
The multi-award-winning indie strategy masterpiece is back with a brand new expansion pack! Frozen Synapse: Red adds awesome features like co-op play against the AI and a brand new unit, as well as a selection of additional music tracks plus an exclusive single player campaign.

Don't forget you can also keep up to date by adding the Indie Game News Google+ page to your circles.
Labels: announcements, mac, pc