Gateways coming to Steam, Desura and XBLIG on September 13th

A message from Smudged Cat Games:


The world warping, gravity defying, time travel feast that is Gateways is currently available from the Smudged Cat Games website but from September the 13th it will also be available through Steam, Desura and XBox LIVE Indie games.  Yes, soon you’ll be able to rack up some Steam achievements while you’re playing one of the most fascinating puzzle games of recent years.  Anyone buying the game directly from Smudged Cat will be entitled to a Steam or Desura key when the game launches.  The game will be appearing on XBLIG as part of the Indie Games Uprising where it will be launched along with some other great new titles.

Gateways has just undergone some changes recently, bringing it to version 1.08, which makes it quite a different game to when it originally launched on the 22nd of June.  The map has undergone a reshuffle, new puzzles have been added, power ups need to be used to escape the area they where collected in and the beginning has been redesigned, all making for a much smoother and improved experience.  Backtracking through the map to find those areas you missed is now a painless experience thanks to shortcuts that unlock as you progress through the game.  The cost of using help points to discover if a puzzle is solvable has been dropped to 5 orbs and various graphical improvements have also been made.

Gateways is a 2D platform game set in the lab of an inventor called Ed following an outbreak of a number of his more "creative" experiments.  Can you help him escape the lab?

Alongside the traditional platform elements such as jumping on enemies heads, spikes and moving platforms are the gateway guns.  The gateway guns allow you to place two gateways on the walls, floors and ceilings of the lab so that when you pass through one you emerge out of the other.  As progress is made through the game different types of gateway gun are introduced with different effects.  After the basic gun, you acquire a gun that creates two gateways of different sizes, passing through one way shrinks Ed to half his size and the other way makes Ed grow to twice his size.  Then you find a gun where one gateway doesn't just connect to the others location but also its time, allowing Ed to travel back in time and encounter earlier versions of himself.  Finally, the last gun manipulates gravity so passing through allows Ed to walk along walls and on ceilings.

Gateways takes place on a single sprawling map rammed with puzzles and challenges.  As power ups are acquired more and more of the map opens up containing more power ups and secrets.  In addition to the gateway guns Ed will also find a torch letting him light up the darker areas of the map and a mirror which can be used to deflect lasers.
A sophisticated help system will help Ed along throughout the game.  Every puzzle has a help point next to it where Ed can use power orbs to find out if the puzzle can be solved using his current power ups and abilities.  If it can be solved and you're still stumped then spending more power orbs will provide you with the solution. 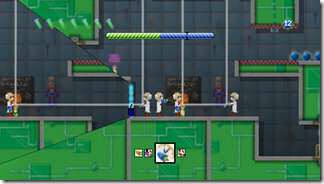 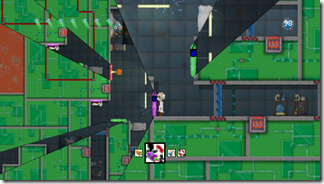