Chess Deluxe released for the Mac

Sydney, Australia - Nicholas Cooke today is pleased to announce he is bringing his iOS app Chess Deluxe to the Mac, Chess Deluxe is now available on the Mac App Store. Chess Deluxe takes the experience of chess to the next level with a simple yet elegant UI, great graphics and fantastic gameplay.
Chess Deluxe supports both 1 player, 2 player and online gameplay using Game Center, so you can play against your friends, or test at your skills against the AI. With Chess Deluxe you can now play against anyone using a Mac, iPhone, iPad and iPod touch with Game Center on OS X Mountain Lion. 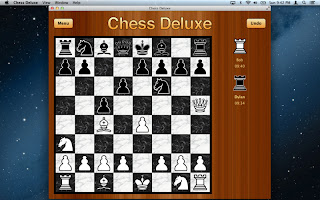 Chess Deluxe features:
* A simple, easy to use interface
* Easy, Medium and Hard difficulties to suit all players
* Play online with friends or anyone using Game Center
* Play against others on iOS or Mac
* Unlimited Undo
* Move Highlighting
* Optional Timer
System Requirements:* Any Mac running OS X Lion 10.7 or later
* Online play with Game Center requires OS X Mountain Lion 10.8 or later
* 8.4 MB
Pricing and Availability:Chess Deluxe 1.0 is now available for $2.99 (USD) in the US and is priced accordingly in other regions. Chess Deluxe is available world wide from the Mac App Store. Please visit Nicholas Cooke's website for more Chess Deluxe information including screenshots, and for more information on Nicholas Cooke. Nicholas Cooke has also developed What Day Is That? and Is That Prime? for iPhone and iPod touch, as well as the official app for Sydney's Alive 90.5.
Based in Sydney, Australia, Nicholas Cooke is an individual iOS app and Web Developer. He has been building websites for over 10 years and iOS apps now for 3 years, and takes pride on working hard to build great websites and applications.


Don't forget you can also keep up to date by adding the Indie Game News Google+ page to your circles.
Labels: chess, mac, new release