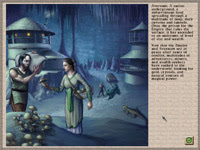 Aug  14th, 2012 – Spiderweb Software, Inc. (www.Spiderwebsoftware.com) announced today that Avernum 6 HD is coming to iPad on October 10th, 2012. Avernum 6 HD is the final game in the epic, award-winning Avernum series of fantasy adventures. Set in the world of Avernum, an enormous series of caves far below the surface of the world, players travel into the strange subterranean land of Avernum one last time with all of its dungeons, labyrinths, and constant warfare.

Avernum is a nation underground. It is a land of people living in an enormous warren of tunnels and caverns, far below the surface of the world. Once a prison colony for rebels and thugs, it is now a wild frontier, full of adventurous souls looking for wealth, fame, and magical power.

Then the Blight came. Almost overnight, the mushrooms Avernum needed to feed itself withered and died. Then the denizens of the low tunnels, the savage, reptilian Slithzerikai, emerged. Sensing weakness, they struck, destroying much of a weakened Avernum and creating waves of hungry, desperate refugees.

This final set of disasters threatens to destroy your homeland in a spasm of famine and warfare. Only you can help your people to get to safety before everything falls apart.

Find out more information at http://www.avernum.com/avernum6 and check out their other iPad titles, including Avadon: The Black Fortress and Avernum: Escape from the Pit!


ABOUT SPIDERWEB SOFTWARE
Spiderweb Software, Inc., an independent game-design company based in Seattle, WA, is fanatically dedicated to creating fun, exciting fantasy role-playing games for Windows, Macintosh, and the iPad. Past titles include the award-winning Exile, Avadon, Geneforge and Avernum series. More information on the company is available at www.spiderwebsoftware.com.

Don't forget you can also keep up to date by adding the Indie Game News Google+ page to your circles.
Labels: announcements, ipad, rpg