The indie construction sandbox video game is updated with new features and content. 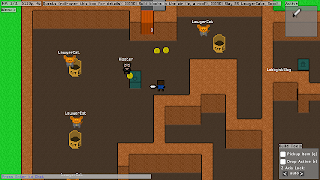 SEATTLE, WA - August 30, 2012 - Archive Entertainment is excited to announce several new updates to 8BitMMO. The game is a construction sandbox where players can build houses, castles, even entire cities in a retro-style massively multiplayer world.

New Enemy: Hipsters - They are known as the most dangerous game, in large part because of their extra health points and propensity to hit players with cans of PBR. Hipsters join the roster of enemies players can fight.

Player-Built Dungeons - Players now have the ability to place monster spawn points and create their own dungeon environments. Players are using the system to make creative dungeons like a coffee shop dungeon for Hipsters, or a post-apocalyptic wasteland for the LawyerCats.

Steam Greenlight - 8BitMMO is now available for users to vote for in Steam Greenlight, Valve's new system to determine which indie games to release on Steam. Please consider voting for us at http://8bitmmo.net/greenlight 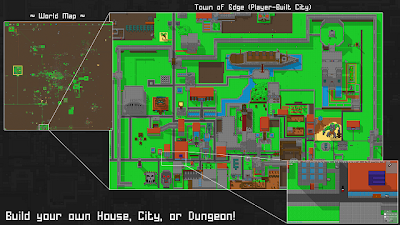 About 8BitMMO:
8BitMMO is a online videogame where players can shape the world block by block. The game's engine allows for a wide variety of player made constructions.  Players can build solo, or group up and create their own towns with friends for cooperative building projects.  In either case, a grief protection system protects the player's creations from unwanted interference. The game is humorous in tone, with amusing quests and unusual enemies.  There is also Player vs Player and Player vs Environment combat.
About Archive Entertainment:

Archive Entertainment is a one-man indie developer, Robby Zinchak. Previously a Producer at Microsoft, he has also led game creation at Capcom and Midway, producing titles such as Final Fight: Double Impact, andFLOCK!. He is now working full time on 8BitMMO from his home in Seattle. Robby has a long history with games: he wrote his first one 18 years ago on a cutting edge 16-color PC. Since then, he has continued to create games while retaining that same pioneering spirit.

Don't forget you can also keep up to date by adding the Indie Game News Google+ page to your circles.
Labels: rpg, version update