The game has certainly earned the title of hate story, for this reason I am introducing the 'facepunch scale' this is the scale of how much the game causes you (or at least me) so stop playing and daydream about punching certain characters in the face.

This game would rank 7/10 on the FP scale, meaning I will not stop playing but after a play session I will have regular daydreams for a few days about exacting revenge upon certain characters. 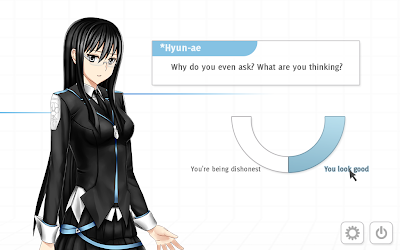 The game is a visual novel in which you are sent to an abandoned space ship in order to retrieve the log files to find out what caused it to go silent. The game's narrative is told mostly through the reading of what amount to emails and diary entries of the dead crew. This can be an issue for some people as trawling through these blocks of text can be a little laborious, and the two characters, a pair of AIs, often tell you to 'just read the entry I unlocked for you', rather than simply tell you some important plot information.

The art is good, the music is very atmospheric and unimposing, however most of the tracks are very similar and I fell a little more variety would have been nice.

Most of the plot reveals ate surprising, except for one which is made purposely obvious from different pieces of evidence, making the actual event seem all the worse since it was expected.

The game has odd pacing, most of it being reading blocks of text interrupted only by having to type into a console or talking to an AI every now and then. Then at one point there is a timed sequence. Even though there is a long timer, it is definitely a stressful part of the game, in a good way. This sequence also justifies the usage of the console screen, which some find a little bit annoying. 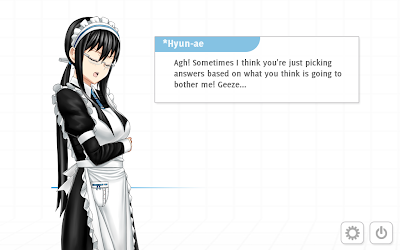 The biggest issue with the game is it's length. The game takes around 5 hours to complete one run through, and if you speed through after that to get the other ending you may get an additional hour and a half. The game is high quality with good story, solid music and nice graphics, and you start to get attached to the characters, although that would have been helped if the game was longer.

It really comes down to one question: are you willing to pay approximately £10 for a 6 1/2 hour game?  If so, then I would certainly recommend it, the quality I'd certainly high. If not, fair choice, it is over pretty fast. It is one of those games that you get into and time passes quickly.

Analogue: A Hate Story is available for PC, Mac and Linux.