It's not easy being the world's best jewel thief. It seems that everything is against you – first you steal a pendant that attaches itself irrevocably to your arm, transforming you into a werewolf; then the town's major issues a complete city-wide clampdown and acres of technological security systems are against you. There's something fishy going on in this town... in fact, more than one strange thing... and you're caught right in the middle of it.

You play Lucas MacGuffin in this game which I can only describe as a sprawling mix of puzzle game and RPG, with a splash of adventure gaming thrown in. Each screen contains its own puzzle(s), but there are a lot of quests (thankfully not all of the fetch-and-carry variety) to perform, and a living, breathing game world – you don't merely solve puzzles but also talk to people, help them out, manage your finances, etc. The graphics are beautifully designed and nicely animated, while both the music and ambient sound effects are very well done too. It's presented as a more or less top-down view, with comic-book style cut scenes to progress the plot. 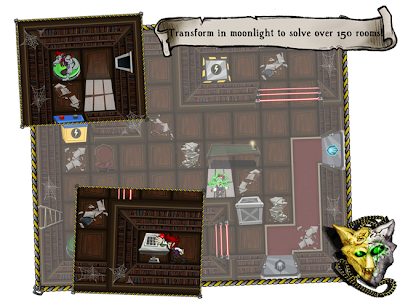 The game features a number of devices, including a hints system, auto-mapping and a quest log, to stop you getting stuck for too long in any one place; since it's a pretty long game, that doesn't mean you're going to be completing it any time soon though, and there are a large number of unlockable extras to keep you amused once you've completed the game. In the game itself you'll meet quite a few different people, some of whom are quite memorable.

Once I'd got over my slight disappointment that this wasn't going to be a traditional point and click adventure a la Brawsome's debut release Jolly Rover, I found MacGuffin's Curse to be an extremely enjoyable game. It mixes features from different game genres well, the plot is consistently interesting, the dialogues and descriptions often amusing, and overall it will keep you hooked for a long time. The challenge level is nicely balanced so that you keep making progress but including puzzles that definitely require engagement of the old grey matter to get past. Highly recommended.

MacGuffin's Curse is out for PC, Mac and iOS devices (PC version reviewed – it was a pre-release version but I don't think much will have changed in the final release).