Battle Group is a PC game ported over from iOS devices, with you playing the role of Captain of a Destroyer class ship.  More specifically, you control the three missile batteries; the course and speed of your ship is automatic.  As part of the Allied Nations force, you have to deal with a gang of ruthless, well-equipped, and organised pirates.


The game is simple and its touch-screen origins are clearly seen, but for all that it plays very well on a PC (as long as your mouse is in good working order!).  You simply have to point and click to shoot as long as you have a battery available to use – making sure you don’t fire too much too quickly adds a little bit of strategy to the game, as does needing to just the distance a ship of plane is going to travel before your missiles get there.  As you complete missions you earn XP, which can be used to improve your ships.  On some missions you have an accompanying ship, which you do not control directly but give it a target range to fire at automatically, until it needs to reload. 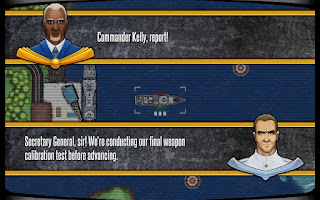 The action is really fast and furious, and with the simple strategic elements this makes a game whose bite-sized missions are entertaining and challenging to play.  It probably won’t take you very long to complete all the missions, but there is a certain amount of replay value to the game.    The graphics are nice and cartoony and the cheesy cut-scenes suit it well.  It’s in the sound design that Battle Group really excels however; the music’s good and the sound effects are extremely atmospheric; add a decent set of headphones and you get a real feeling of “being there”.  For the price, it offers a decent playing time for shoot 'em up enthusiasts, and it has a unique feel to it. 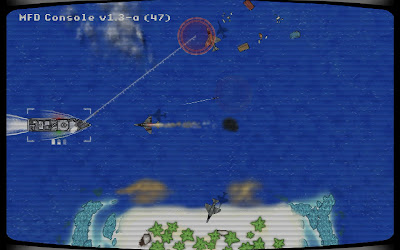 Battle Group costs £3.50 and will be available from Merge Games (release date still to be confirmed at time of writing this review).