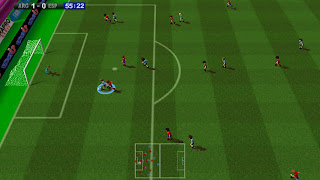 This is going to be a short review because there are only a few things you need to know about it.  Football up is a retro style footie game, something along the lines of Sensible Soccer, and fans of that era of game will enjoy it's arcade feel.  The graphics are nice enough and the music / sound effects are decent.  The basic gameplay is good, with 2 control mechanisms and it's pretty responsive.  You can use aftertouch and there are a couple of special moves you can perform (ie overhead kick).  The aftertouch controls are extremely sensitive and it will take a lot of practice to even begin to master it. 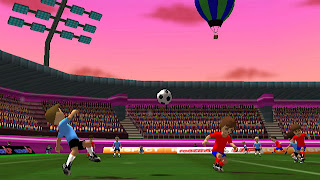 The options are pretty limited in terms of teams available and there's only one competition - although it's nice that you can make a team completely out of your Miis, which can result in some amusing moments in the replays.  I don't think relative team strength is taken into account (at least, I can't explain Scotland winning the world cup if it is!!)/  The main problem with Football Up is that the AI is absolutely brutal; after a number of games I have yet to score against an AI team, let alone beat one (losing 4 or 6 nil has been my default result!).  As there is only the one difficulty level, as a single-player game I couldn't really recommend it.  It's really designed as a multi-player game, the single-player mode (in its current form) adds very little value.

However as a 2 or 4-player game it's a lot of fun, so if you are likely to be able to play it with one or more other footie-mad friends (especially if you are of a certain age and get all nostalgic when people talk about games like Sensible Software and Kick Off 2), it would definitely be a worthwhile purchase.