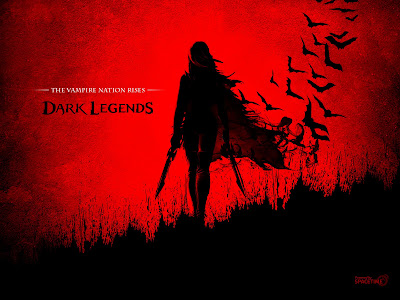 AUSTIN, Texas – Jan. 26, 2012 – Spacetime Studios takes its mobile and desktop Legends franchise into a frightening new world with Dark Legends. Players will embrace the secret societies of vampires to challenge the hordes of undead, werewolves, demons and humans that hunt them. The title will be released for Android, iOS and Chrome in the first quarter of 2012.


Fans of the popular Legends franchise, Pocket Legends and Star Legends, will discover a gameplay evolution in Dark Legends that draws them even deeper into the experience. The combat system delivers fast paced, action oriented gameplay that includes new mechanics such as charge attacks and the ability to drain enemies. A wide breadth of solo and multiplayer content will also be available.

The most significant change is a much deeper focus on narrative. In addition to story communicated during the 3D multiplayer missions, players will periodically be given the option to complete quick action missions with a single tap. These missions use brief cut scenes to create an interactive storybook, where players experience the life of a vampire up-close and personal.

The company’s goal for Dark Legends is to combine casual, strategic advancement content with their award winning real-time 3D multiplayer system to create a blend of gameplay never before seen.

“With each entry to the Legends franchise we raise the bar for the pick-up-and-play MMO space,” said Gary Gattis, CEO, Spacetime Studios. “The changes between Pocket Legends and Star Legends were significant, but Dark Legends is a quantum leap forward in interactive storytelling.  Live the dark fantasy and play anywhere, anytime, anyone!”

Dark Legends opens with the player recently raised and under the direction of the vampire that sired them. The secret existence of vampires has been exposed and angry, misguided humans are uniting to exterminate the undead plague by any means necessary. Players must work with their clan to survive this brutal new world.

Dark Legends with be shown for the first time publicly at GDC 2012.

In 2010, Spacetime released Pocket Legends, the world’s first cross-platform, 3D, persistent mobile MMO. The game’s pick-up-and-play format, expandable nature and unparalleled instanced gameplay have propelled it to become a landmark title on Apple and Android-based mobile devices. In 2011, Spacetime became the first 3D MMO publisher in history to allow people to play the same game together on desktop computers, smart phones and tablets.

Spacetime has been recognized by Develop as one of the world’s 100 most successful game studios. The company continues to expand its content and technology lead in the mobile multiplayer market.