Meadville, Pennsylvania - Nuclear Nova Software today is pleased to introduce Pinball Shuffle, its eighth game for Mac OS X. To celebrate the release Pinball Shuffle is on sale 70% for a limited time 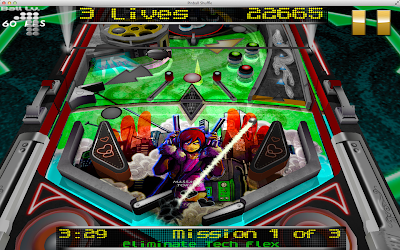 Stabb Gunner Pinball is back! Pinball Shuffle is the follow up to Pinball Massacre, the first round in the epic pinball battle. Like the first table, this is a high octane arcade style pinball game. Table One brought never before seen pinball innovations like MASSACRE MODE and the addition of the LEVEL BALL. This time around, you're also going to need to ratchet up your game for BOSS BATTLES.

BOSS BATTLES introduce, well bosses, from the Stabb Gunner universe and drop them squarely between your new high score and an early game over. BOSSES actually move around the pinball field and generally try to ruin your day. Make sure you ruin their's first. With MASSACRE MODE you need to get your flippers ready because you're about to get hit with an angry pinball blitz. Score as many points as you can in a very short time. With the LEVEL BALL, we add an RPG twist that makes each pinball count. While a ball is in play, it gains experience and Levels Up. Scoring you more points and generally behaving more awesomely. Based on the Stabb Gunner Universe, and featuring killer tracks from Chiptune giants Fantomenk and Cheap Dinosaurs and more, Pinball Shuffle brings unique energy, art, humor, and 8bit culture to the pinball scene. Pinball Shuffle: fake Pinball just got Real 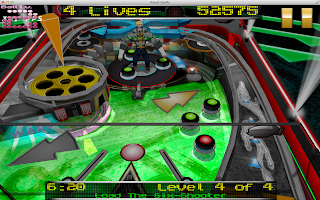 Pricing and Availability:
The full version of Pinball Shuffle is on sale for $2.99 USD (Reg 9.99) and may be purchased through the Mac App Store. The paid version includes no time limit, no shareware delay, and free updates. The Pinball Shuffle demo is time limited, has delays, and is free to try on the Mac App Store. iPhone/iPod/iPad owners can check the game out on the iTunes App Store, where it has simultaneously been released at 67% off ($0.99 USD). Nuclear Nova Software currently has eight games and one utility, all available on the Mac, iPhone, and iPad.


Located in Meadville, Pennsylvania, Nuclear Nova Software is a privately funded company founded in 2002 by Jake Leveto. Nuclear Nova Software was founded with the intent of developing unique and challenging games with compelling game-play for the Mac platform and iPhone.
Labels: mac, new release, pinball