The Wreckless is a single-player, mission-based space combat game that reminded me a bit of Wing Commander.  You control a drone fighter ship operating out of the base ship “The Wreckless” and must help your corporation in a universe of cut-throat industrial espionage.    There are 16 missions, with duties ranging from simple search and destroy and protecting a convoy to more complex operations.  If you lose your ship, as long as there’s another one available you can jump back into the game and still have a chance to complete the level.  The first couple of levels are tutorials, which aren’t too bothersome too complete but which give you the chance to get used to the controls without too much pressure. 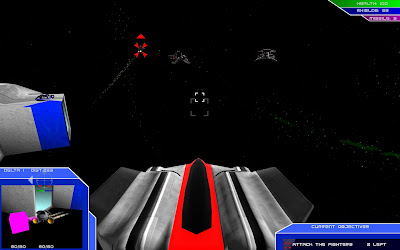 The interface, using keyboard and mouse, never quite felt completely intuitive somehow, but to be honest it felt reasonably comfortable after just a couple of minutes.  The voice acting, music and sound effects are pretty good, although the sound levels were set a bit oddly and didn’t appear to be changeable, resulting in it being just a little difficult to hear the speech at times.  There’s also a warning sound which overrides everything else – understandable perhaps but this gets a tad annoying at times. 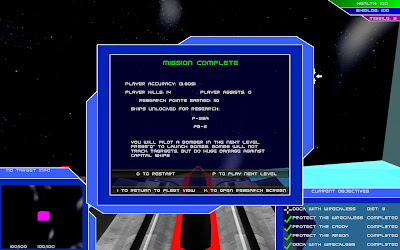 The graphics are reasonably good - the ship models are very simple, but since quite a lot of the time you’ll be in the middle of a pitched battle with ships moving around with lasers and missiles all over the place, you really won’t notice that!  Most missions begin with a wait – until a target ship jumps out of hyperspace, a drop is made, a convoy ship moves off etc – and it’s really only in these moments that the graphics don’t look good.  When there’s a lot of action on screen, it actually looks pretty great.

The missions are well thought-out, interesting and varied – it would have been nice if there had been more of them though.  Each mission begins with a briefing, and the chance to change the ships your fleet is using; there is a briefing after the mission too, which explains where you failed or if you succeeded.  Successfully completed missions earn you “Research Points”, which you can then use to expand the range of ships you can use – a nice extra feature.  There is maybe a bit of replay value to using different ships for the various missions.  As well as the missions, there is also a “combat simulator”, which lets you set up battles with whatever ships you’ve researched already.  This adds to the longevity of the game. 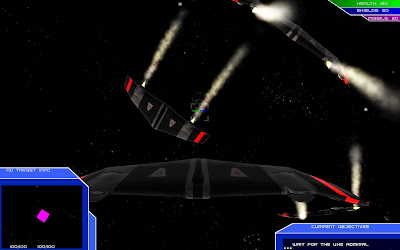 The Wreckless was developed by Duct Tape Games and is available for PC and Mac, and costs $9.99.  At this price it’s definitely quite good value for money, and if for instance new missions are ever added as a free DLC, it could become excellent value for money.  (If this happens you will of course hear about it on www.IndieGameNews.com!)  If you liked Tie Fighter, Elite (albeit without the trading) and that sort of game, you’ll definitely enjoy The Wreckless.